Hathcoat was entering his third season as a member of the Spain Park varsity wrestling squad. 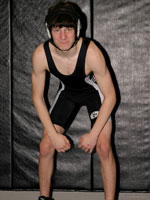 The Baldwin County Sheriff’s Office continues to search for the 16-year-old’s body, according to Maj. Anthony Lowery in a Sept. 5 press release. The office has contacted several agencies in this case to aid the search effort, the release read.  The search, which has been hampered by the remnants of Tropical Storm Lee, will continue as weather permits.

Hathcoat, who finished third in an Alabama High School Athletic Association Class 6A section meet last season and participated in the state tournament, was visiting the Gulf Coast with his parents, Charles and Connie Hathcoat, and family members along with two friends during the Labor Day weekend. Hathcoat and his family were staying in The Beach Club resort in Fort Morgan.

Fellow Spain Park student Jack Bush, a 16-year-old, was pulled from the rip currents and transported from the scene to South Baldwin Regional Medical Center, where he was treated and released to his father.

University of Montevallo freshman Camilla Alderin controls the ball in the Falcons' win over West Georgia in their first home... read more