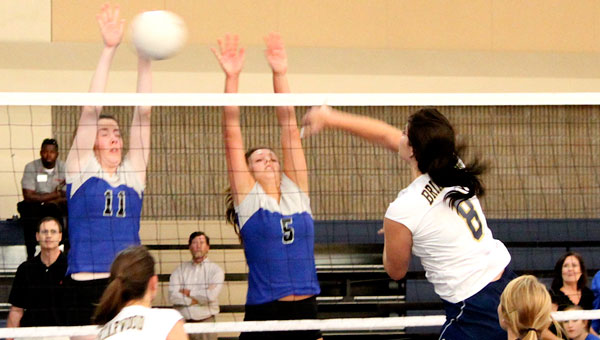 Chelsea High School senior Samantha Colyer and junior Holly Marbut, from left, attempt to block an attack by Briarwood Christian senior Logan Nasworthy in the Hornets' loss to the Lions in a Class 5A, Area 7 match Sept. 8. (Reporter Photo/Kala Bolton)

The Briarwood Christian School and Chelsea High School volleyball teams sure know how to put on a good show.

“It was a tough loss,” said Chelsea setter Jess Vohler. “It takes a lot to beat Briarwood. They’re a really good team.”

In a match marked by extended rallies between the two squads, the Lions took the first set on kill from Briarwood senior Logan Nasworthy.

“It was a little rough at first, but thanks to our student section and fans we finally started picking our energy up and got it all together,” said Nasworthy, who racked up 10 kills, six digs, two aces and one block.

Chelsea’s Samantha Coyler sealed a win for the Hornets, closing out the second set with a block and two service aces.

The Lions looked fierce in the third game, taking a win before Chelsea reached the 10-point mark, but the Hornets bounced back to take the fourth set, sending the match to a decisive game five.

The two squads were neck-and-neck well into the fifth set until the Hornets pulled away, going up 14-11. With the game on the line, junior Lizzie Baumbach stepped up for the Lions, scoring on two back-to-back services aces. A Chelsea error brought the Lions up by one before sophomore Georgia Muir-Taylor tipped the ball onto the Hornet’s side to seal the deal for Briarwood.

“I feel really good about how we played,” said Briarwood senior Carly Cline, who totaled three kills and five digs. “I think we played really hard and fought the whole time.”

Chelsea head coach Jamie Gill said, despite being handed their first area loss of the season, the Hornets have a lot to be proud of.

“We definitely left everything out on the court,” Gill said. “The girls played harder than they’ve played all season. They wanted it. It just didn’t fall our way.”

Although Le said he was glad to come out with a win, having Chelsea within one point of victory during the fifth set was too close for comfort.

“I have to applaud Chelsea because they played great,” he said. “I feel very blessed that we got out with a win.”