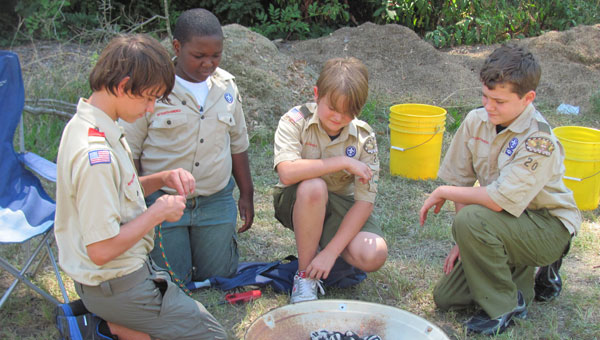 On Saturday, Aug. 27, the Boy Scouts of America sponsored by the First Presbyterian Church of Alabaster held a scouting expo on Alabama 119 near the church. It was quite a sight (and site) as there was a huge tent, rope tying, campfire making demonstrations, cooking showmanship, examples of natural lore, information booths, pictures and lots of helpful Scout leaders and Scouts.

First Presbyterian Church hosts Cub Scout pack 394 (established 1981) for boys 6 through 11. Cub Master is Mark Beetem. Troop 20, chartered by First Presbyterian in 1978, is most well known. Dennis Rollins is the Scout Master. Boys ages 11 to 18 make up this group. The newest group, established in 2008, is co-ed and for ages 14 to 21. Aptly named Venture Crew, this group focuses on high adventure and social activities. Next summer, this group will travel to Philmont Scout Ranch in Cimarron, N.M. for 10 days of backpacking in the Sangre de Cristo mountains.

Over the years, Troop 20 Scouts have traveled to many locations for their outings: Oak Mountain State Park, USS Alabama in Mobile, Buck’s Pocket State Park, Camp Sequoyah, Shiloh and Chickamauga Civil War battlefields, various caverns and a forested area in Coosa County loaned by an FPCA member. Frequently, the Scouts develop their own campsites.

Skill development in all levels incorporates elements of outdoorsmanship, love of nature, emergency preparedness, citizenship, hobbies and crafts and physical fitness. They learn first aid, cooking, knots and lashings, navigation and identification of plants and animals. A Scout can advance from Tiger to the highest rank of Eagle Scout. There are more than 100 specific merit badges in scouting of which 21 must be earned to achieve Eagle. A large civic or community project is also required for the Eagle status.

The recent Scouting Expo was the brainchild of Troop and Crew Leader Dennis Rollins to increase visibility of the units in our community and is hoped to attract new recruits.

Sound interesting? Is it something in which you’d like your kids involved? Many of our most successful folks and leaders trace their beginnings back to scouting.

Bob Miller Sr. is the charter organization leader for all three units. He can be reached at 663-3530 for more information.

Life lessons at a young age

By SANDRA THAMES / Community Columnist A 2-year-old in Alabaster is getting an early education in life. He knows, loves... read more