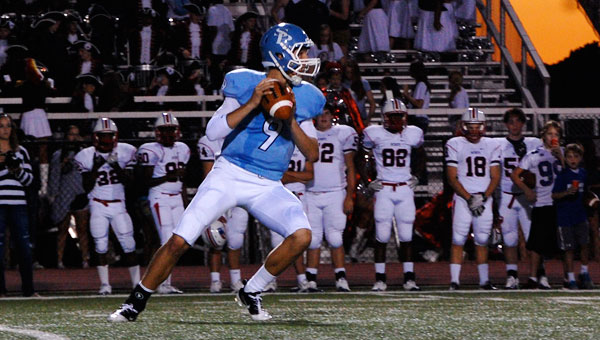 HOOVER — After forcing four turnovers in the game, the Spain Park Jaguars defeated the Homewood Patriots 27-6 in a Class 6A, Region 6 contest Sept. 9.

The first quarter was all about defense for both teams. Neither team could find a rhythm to start the game, and the Jaguars forced punts on every Homewood drive of the quarter, but
Spain Park’s offense could not get anything started as well and turned the ball over on both of their drives.

The Homewood offense could not convert those turnovers to points as neither team would find the end zone in the first quarter.

After forcing a turnover to end the quarter, the Jaguars’ offense looked to gain some momentum. Three plays later, senior running back Sean Mardis took the ball 42 yards to the house to get the first points on the scoreboard for Spain Park.

The defense came back out on the field with the crowd going wild and forced another turnover on third down to get the ball back on the Patriots’ 8-yard line. It didn’t take long for the Jaguars to find the end zone again as Trudarius Clark ran it in from 8 yards out to take a quick 14-point lead early in the second quarter.

Spain Park finished the half with a field goal after stopping the Patriots on a fourth down and forcing an interception. The Jaguars went into the locker room with a 17-point lead.

After halftime, both defenses were still playing strong. Both Spain Park and Homewood were forced to punt on their opening drives, and the only score of the quarter would be from the foot of kicker Jake Hoffman to take the lead to 20 points.

The fourth quarter was owned by the Spain Park defense. With the end in sight, the Patriots still had time to come back. But the Jaguar defense forced two fumbles deep in Patriot territory and converted one of those turnovers into a touchdown. It came from the hands of quarterback Nick Mullens, a 71-yard pass to Alondo McDonald.

The huge play let the air out of the Homewood sideline and put it just out of reach with only six minutes left in the game. The Patriots would not give up yet, and after an 11-play drive, they finally got on the scoreboard with a pass from Stephen Baggett from 20 yards out.

Adding insult to injury, the extra point was blocked to keep the lead at 21 points.

“We’ve got some work to do on Monday, and we’ve just got to lock in and quit making so many mental errors and dumb mistakes,” said Spain Park coach Chip Lindsey. “We’ve got some great kids that work real hard.”

Spain Park finished the game with 376 total yards, with 265 of those coming from the arm of Nick Mullens. The Jaguars head to Oak Mountain next week to take on the Eagles.