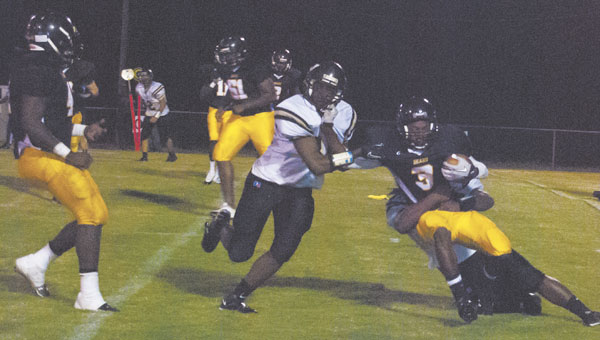 Vincent scored on its first possession on a long run to put the visiting team up 6-0.

Billingsley couldn’t answer thought and was forced to punt after going 3-and-out. Good hits by Torrey Green and Carlos Caver stopped Vincent on its next possession.

The Bears would get the ball back but fumbled the ball, which was recovered for a touchdown by a Vincent’s Demauntey Johnson. A successful 2-point conversion put the Yellow Jackets up 14-0.

Billingsley would drive the field on a later possession behind long runs by Jimmie Lanier and Devion Hardy. A red zone run by Caver set the Bears up with 2nd-and- goal from the 2.

However, a bad snap on the next play would back Billingsley up to the 13-yard-line, and the home team ending up turning the ball over on downs after a 4th-and-goal from the 3-yard line.

Vincent would take over the ball and deliver a dagger to Billingley’s hopes for a comeback. Johnson found wide receiver Daniel Hawkins for a 95-yard touchdown to give the Yellow Jackets a 22-0 advantage after a successful 2-point conversion.

Johnson would later throw another long, 48-yard touchdown pass to cap scoring for the night at 29-0 with 1:02 to go before halftime.

Preston Wallace made several big plays for Billingsley in the second half at quarterback. Caver had several long runs too in the loss.

Vincent splits a pair of matches