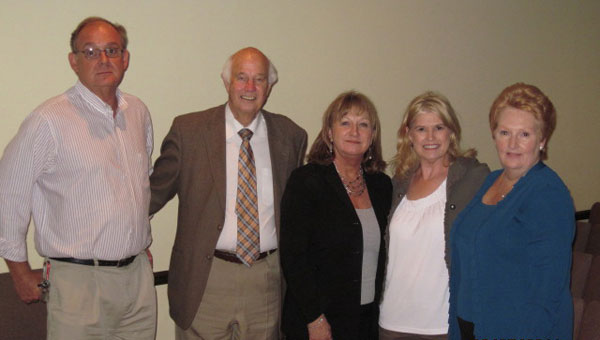 “I’ve been in senior management for 35 years, but no one has taken on the responsibility like (Bev has),” he said. “It seems like she’s been here for years and years.”

September 7 was Crowder’s last day as McCrory’s assistant, as she and her husband, Bill, decided to move to California in October to be closer to the Crowders’ children and grandchildren.

“While Bev Crowder’s time working for the City of Montevallo was brief, she made a lasting impression. It is rare that a gem passes through a town this size and leaves such a mark,” City Councilmember Hollie Cost said.

Cost worked with Crowder on Montevallo’s new Vallocycle Bike Share program, along with a number of other city-related projects.

With each project she brings together innovative ideas and puts forth logistical considerations that have proven highly beneficial to us all,” Cost said. “Her departure will leave a great gap in our city administration.

“While of course, I wish her the best,” she added, “I also secretly wish that she will see the light and stay with us in Montevallo!”

Crowder’s background in higher education made her an ideal assistant in a town like Montevallo, where the university is the center of the community, said Montevallo Chamber of Commerce President Mary Lou Williams.

“She has been a strong right hand for Mayor Ben McCrory, but I know others among the City Hall staff and in the community have also benefited from her assistance.”

McCrory said Crowder was “seamless,” and because of this quality, “she just makes things happen,” he said.

“She’s got a business card that says assistant to the mayor,” McCrory said, “but she’s gone well beyond that in her willingness to help other people.”

“Every municipality needs a Bev Crowder, and Montevallo with surely miss ours,” he said.