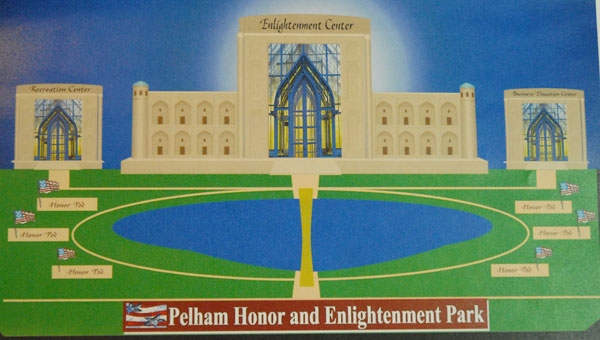 Pelham Mayor Don Murphy's rendering of an "Honor and Enlightnement Park" he said he would like to see constructed on recently purchased city land. (Contributed/Don Murphy)

Pelham Mayor Don Murphy said he would like to see the city construct an “Honor and Enlightenment Park” on land the City Council recently voted to purchase near Pelham City Park.

Murphy’s comments came during a Sept. 12 City Council meeting, during which he presented a rendering of the park to those at the meeting.

“It’s a bold step, but you’ve got to have a dream of what you’re going to do,” Murphy said. “I just wanted to get the idea out there and let people see it.”

A few months ago, the City Council voted narrowly to purchase more than 35 acres of land near Pelham City Park, which currently houses the Gofourth Mobile Homes business and the Belle Vista mobile home park. In early September, the city closed on a purchase of about 1 acre near the center of the property.

Murphy said he would like to see the new park constructed off U.S. 31 where the Gofourth Mobile Homes business is now, and said the park would not interfere with the Belle Vista mobile home park.

In his rendering, Murphy proposed a large, two-story “Enlightenment Center” separated from U.S. 31 by a small lake. Murphy said the first floor of the center could house the Pelham Public Library, and the second floor could house a business development center and possibly dance or art studios.

Murphy also proposed two satellite buildings on each side of the Enlightenment Center. One could serve as a recreation center with a full-size swimming pool, and the other could serve as a business education center and house classes for the University of Montevallo or another four-year college, he said.

Around the small lake, Murphy proposed six “honor pods,” which could house plaques paying tribute to those who have helped Pelham grow over the years, veterans, first responders, clubs and organizations, he said.

“We haven’t paid them the respect that we should,” Murphy said.

Murphy said the Alabama Department of Transportation has plans to widen U.S. 31 to six lanes, and add bike lanes and sidewalks along the road. He said the additions would make U.S. 31 “a lot different,” and said the sidewalks and bike lanes would make it easier to access the new park.

“This is something we can build and make it the showcase of Pelham,” Murphy said. “That’s the vision I have, and I hope it’s a vision the City Council shares with me.”

By CHRISTINE BOATWRIGHT / Staff Writer MONTEVALLO – On Sept. 20, students of the University of Montevallo and residents of... read more