Understanding the theology of the body 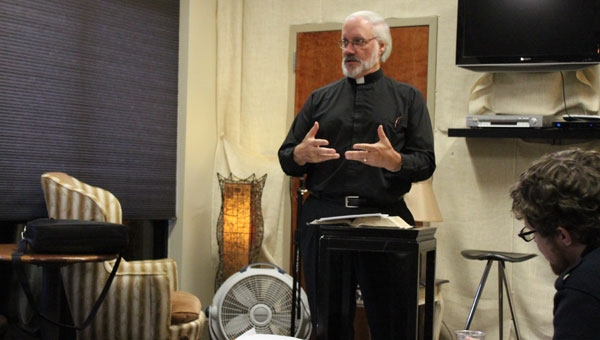 CHELSEA – An eight-week Bible study began on Sept. 8 as Rev. J. Scott Houser of St. John’s Anglican Church of Mt Laurel presented his thoughts on the theology of the human body.

“The theology of the body is not discussing the body, the church. It’s a discussion of the body as created male and female — the very nature of human embodiment,” Houser said. “We’re not bodies plus a soul, we’re embodied spirits.”

Houser began his study in Ekklesia Coffee House by explaining when God became a man in Jesus, the body entered into theology. And when this occurred, the act revealed the highest expression of Jesus’ love for us, he said.

Zac Sullivan decided to attend the Bible study after running into Houser and hearing about the concept.

“It’s a very important subject for young people, especially before getting married. You need to have the knowledge before hitting the problem,” he said.

Houser also addressed how God created male and female as not simply the image-bearers of God, but as participants in the love of God, as they relate to one another.

The seven remaining classes will focus on three basic concepts: original solitude, original unity and original nakedness. Original solitude relates to man being different from every other animal and his realization of his aloneness, Houser said.

“He needed a helpmeet in enabling him to come to an understanding of the fullness of God,” he said.

Original unity will relate how man and woman are “made for natural aptitude for communion and union of life,” Houser said.

Lastly, original nakedness points to a time when man and woman were “naked and not ashamed,” and how “the very thing God had meant expressing union, they covered (after the fall of man),” he said.

“Culture is so oversaturated with sexuality, and that’s not what God intended,” Houser said. “Even in the church, there’s a confusion over what it all means. This study is designed to lay a foundation for human embodiment.”