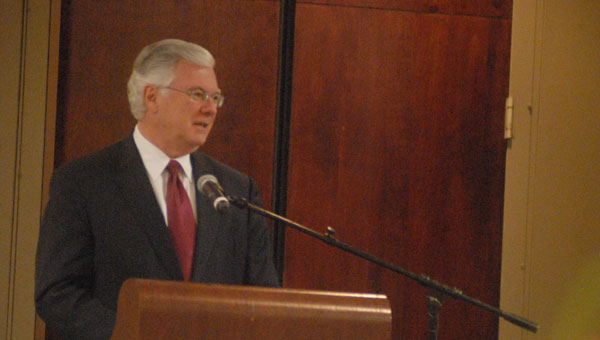 A New York Times best-selling author encouraged a group of about 350 to continue supporting the Pelham-based Sav-A-Life Shelby during the organization’s annual fundraising banquet Sept. 13 at the Pelham Civic Complex.

During the banquet, Dr. Bruce Wilkinson, author of the best-selling novel “The Prayer of Jabez,” praised Sav-A-Life Shelby and offered a faith-centered pro-life message to those in attendance.

Sav-A-Life Shelby, which is based in Pelham and also operates a location off U.S. 280 in Hoover, is a Christian organization which works to help and minister to individuals and couples facing unexpected pregnancies.

“When God creates a being inside a womb, it’s God forming that being,” Wilkinson said. “It is never the will of God that a baby be aborted.”

Wilkinson said 73 percent of abortions are performed by “people who didn’t want to deal with (pregnancy) because they didn’t plan for it,” and said humans were created to be the “children of God.”

“God wanted to create beings that was as close to God as they could be without actually being God. When God wanted a child, he made one,” Wilkinson said. “And God said ‘I want (humans) to experience what I did. I want them to have offspring.’”

Wilkinson told those in attendance about the biblical depiction of the Semitic god Molech, which Wilkinson said was constructed out of metal and used to sacrifice children in ancient times.

“Every time a person sacrificed a child to Molech, it crushed the heart of God,” Wilkinson said. “God said in his own words ‘It never entered my mind that you would kill your children.’”

Wilkinson said God allowed humans to have the freedom of choice, but said God does not condone abortion.

“Every time a woman thinks about aborting her baby, God gets all over her and says ‘Don’t, don’t, please don’t,’” Wilkinson said. “If they say ‘I’m going to do it anyway,’ God will not stop them. That’s freedom of choice.

“God wishes someone would step in at that moment of freedom of choice and save the child for him,” Wilkinson added.

“Planned parenthood to this day has never talked someone out of an abortion,” Wilkinson said. “They are in it for the money.

“Abortion goes so far beyond breaking the heart of God,” he added.