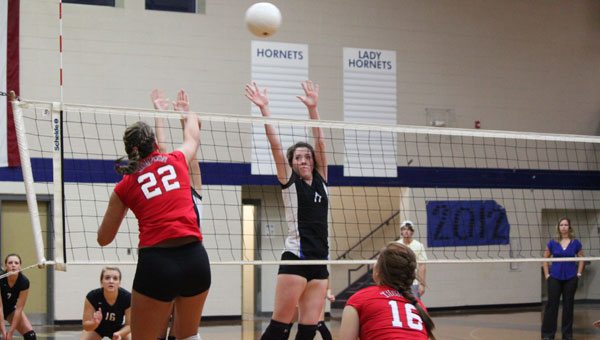 The two squads were neck-and-neck during the first set, remaining tied with 22 points each, but a block from Thompson’s Abby Kreuser and kill from Sonia Acosta helped the Warriors take the first game.

“I feel like we played hard,” said Douglas, who led the team with nine kills on the night. “We fought for everything.”

Despite being down by two sets, the Hornets weren’t ready to give up. The third game proved a battle as Chelsea came within one point of victory before a kill from Kreuser took the Warriors ahead by one. Thompson won the match on a Chelsea error.

Thompson’s Acosta had 20 assists, Hailey Schatz and Kreuser had four kills each and Kasie Holcomb racked up nine digs and two service aces.

“I feel great about the game,” said Thompson head coach Kellyanne Turnb. “We had two tough games last week, and the girls came back and practiced really hard so I’m excited to come in today and see how they respond and they responded very well. Chelsea plays us hard every single time, so it was nice to be able to take them in three straight.”

While Chelsea head coach Jamie Gill said her team’s biggest issue is a lack of consistency, she is proud of her players and sees great accomplishments in the Hornets’ future.

“I feel like the girls played really hard, and they put everything out there that they could at that time,” Gill said, “but we still have our ups and downs, that rollercoaster stuff where we’ll play for five points consecutively and we’ll have a two points where we miscommunicate or something like that. We still have a lot to work on but I feel very hopeful. I see so many bright flashes of brilliance, of things that they can do and accomplish, but we’ll just have to keep on pushing through those little humps, and we’ll get through it.”