Crim a constant on THS sideline 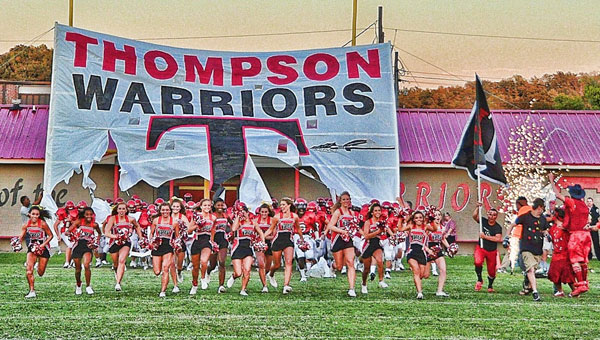 THS alumni Frankie Crim captured the Warriors rushing out of the fieldhouse during their Sept. 9 game against Vestavia. Crim has been taking pictures of the Warriors and attending every THS game for the past five years. (Contributed/Frankie Crim)

Alabaster resident Frankie Crim and her former Thompson High School classmates recently celebrated their 30-year high school reunion. But as she caught up with her peers, Crim began to realize she possessed something they didn’t.

“It’s like I never really graduated,” Crim said. “I’m living a dream right now. After the Fourth of July every year, I start getting really excited about high school football.

“My mom says ‘Frankie, you’re just reliving your childhood,’” Crim said with a laugh. “And I say ‘So what?’”

On the sidelines of every Thompson High School football game during the past five years, players clad in red, black and white have adopted Crim as their “team mom,” Crim said. And, in turn, Crim has extended her family by several hundred kids over the years.

Crim began her time on the Warrior sideline when her youngest daughter became involved in the football team’s trainer program. Through the program, students at the school help the athletic staff care for and prepare the football players for practice and games each week.

After Crim’s daughter, Abby, started helping out on the sidelines, Crim began attending all the THS games as a way to support her family and her alma mater.

“I purchased a nice camera, and started taking some pictures at the games. Pretty soon, some parents would come up to me and say ‘My son is a captain this week, can you get a picture of him for me?’” she said. “So I started taking more and more pictures as a way to get used to playing with my camera.”

Soon, Crim worked her way onto the sidelines to help the trainers during the game, and brought her camera with her.

“The (trainer) girls started calling me mama, so I sort of became the trainer mom,” she said.

While she was not helping the trainers, Crim was snapping as many pictures as she could of the THS football players. Though she originally put her pictures up on her MySpace website, this year Crim began posting the photos to Facebook.com.

“I thought ‘If I put it up on Facebook, the kids can tag themselves and download the pictures straight from there,’” Crim said.

Crim’s daughter graduated from THS in 2010, but Crim can still be found on the sideline of every THS game.

“The players will come up to me and say ‘Mom, you’re not going anywhere,’” Crim said with a laugh. “I’ve sort of become a mascot on the sidelines.

“I keep telling myself that I won’t get attached to the freshmen each year, but it always happens,” she said.