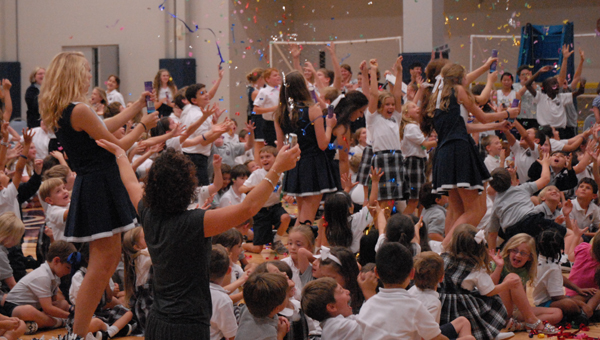 INDIAN SPRINGS – When students at Our Lady of the Valley Catholic School were summoned to an assembly Thursday afternoon, none of them knew what awaited.

“We had absolutely no idea,” fourth-grader Avery Martin said. “I thought it might be an emergency.”

By the time students entered the gym, it was clear this was no emergency.

Students entered single-file through a spirit line of cheerleaders with pom-poms, as though the students were a basketball team taking the court for a big game.

A small group of students walked to the front of the gathering, opened a box and unrolled a banner reading: OLV, 2011 National Blue Ribbon School.

“I was freaking out,” Martin said. “It was really an honor.”

For the next 10 minutes, students screamed and celebrated as confetti filled the air and festive music blared from loudspeakers. Commemorative T-shirts were given to all students as an assistant principal with a microphone led a chant of “O-L-V, O-L-V, O-L-V.”

It was like a sporting event without a game, just the way OLV Principal Sandra Roden wanted it. 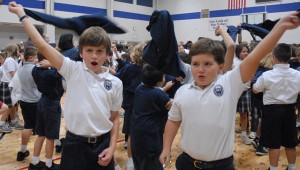 As the gym started to clear, eighth-grader Mick Hagelskamp stood in front of TV cameras and reporters as the cheerleaders gathered behind him smiled big for the cameras, as though Hagelskamp was a starting quarterback who’d just won a bowl game.

“It’s just amazing that we’re one of the top schools in the country,” he said.

The students weren’t the only ones overwhelmed by the good news. So was Trish Hinshaw, president of OLV’s Parent-Teacher Organization.

Four of Hinshaw’s kids have graduated from OLV. Another son, Joseph, is a current sixth-grader.

“This school prepares them above and beyond with the programs we have in place,” Hinshaw sad. “The students leave ready to excel into higher education.”

Administrators at winning schools were notified before the U.S. Department of Education publically announced the selections earlier in the day, which gave Roden time to plan an assembly – a far cry from her reaction to OLV’s first Blue Ribbon in 1998.

“The first time we got it we were novices,” said Roden, the school’s principal for 18 years. “We didn’t know what to do. I remember being so excited and getting on the intercom and announcing it.

“This time we decided we were going to keep it very quiet. We didn’t tell a soul. Only my steering committee and a few key people knew. We wanted the children to be excited and understand that they’re the reason we won.”

Roden said winning in 1998 was “motivation.”

“It would have been easy to slap our feet up on our desk and rest on our laurels,” she said. “We decided that as a staff we weren’t going to do that.”

The students were the deciding factor, she said.

“Without the children scoring so high,” she said, “we would not have received this award.”

At the end of the assembly, the students exited the gym through a spirit line of cheerleaders as Queen’s “We are the Champions” blared from loudspeakers.

“We want the best for our kids,” Roden said. “They’re our future leaders.”

Students in Lyndsay Anderson's second-grade class dressed up as everything from nurses to scuba divers Sept. 15 during the school's... read more