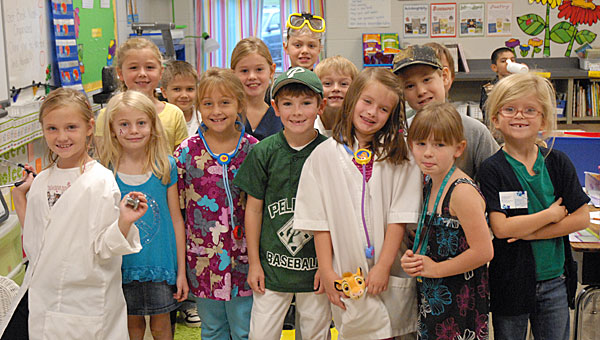 Students in Lyndsay Anderson's second-grade class dressed up as everything from nurses to scuba divers Sept. 15 during the school's career week dress-up day. (Reporter Photo/Neal Wagner)

The halls of Valley Elementary School were filled Sept. 15 with miniature versions of heart surgeons, football players, hairstylists and even deep-water scuba divers, as the school held the fourth day of its career week.

As part of career week, the school’s teachers encouraged students to don the attire of the career they plan to pursue when they grow up. The result was hallways and classrooms filled with nearly every career imaginable from Air Force pilots to professional hunters.

“Throughout the week, we talk with the kids about different jobs in our community and get them thinking about their futures,” said VES second-grade teacher Amanda Burks. “We have a course of study during the week where we ask the kids to identify if a career provides a good or a service.” 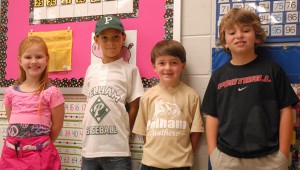 The hallways of the second-grade wing of the school were covered with career-themed items, such as drawings of the children’s career choices and short descriptions of why the kids wanted to enter the field.

While the children were charting their future career paths, they heard from several speakers who currently work in various fields in the area. During the week, Burks’ class heard from a musician wielding an electric guitar, a nurse and a news reporter from the ABC 33/40 television station.

“The speakers tell the kids a little bit about what they do, and talk about what they had to do to reach that career goal,” Burks said. “The kids really enjoyed the musician with the electric guitar because they got to make up their own song.”

VES Principal Deborah Scarbrough said the week helps the kids become motivated to work harder in school so they can move closer to their career goals.

“It’s a really good thing for them to experience what it’s like to be in these career fields,” Scarbrough said. “It prepares them to start thinking about what they want to do when they grow up.”