Calera falls on the road at Elmore County 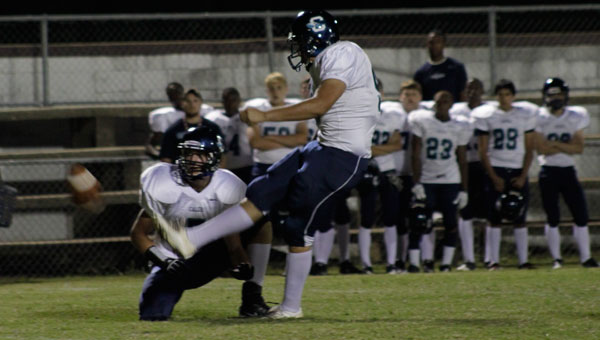 The Panthers struck first on a 51-yard pass from Truman Franklin to Parrish Mitchell at the 10:06 mark of the second quarter. Shawn Smirnoff added the PAT for a 7-0 ECHS lead.

Calera closed the gap to 7-3 with a 26-yard field goal by Francisco Garcia with 8:06 left in the period.

It was Elmore County the rest of the way.

Franklin connected with Smirnoff on a 27-yard strike with 4:54 remaining in the second to go ahead 14-3. The Panthers added another TD before the half for a 21-3 lead as Shukory Whetstone dove in from 1-yard out with 2:09 left until intermission.

The Panthers added a final touchdown on a 35-yard pass from Franklin to Tyler Black with 10:49 left in the third quarter. The PAT was blocked, but ECHS held a 27-3 lead.

Elmore County’s defense allowed the Eagles just over 100 yards in the contest. Calera’s final two possessions ended in a fumble recovered by the Panthers and an interception by Austin Adams.

“This puts us in the front seat, not the driver’s seat,” said Elmore County coach Norman Dean. “But at least we’re more in control for the playoffs.”

By SHANE GAUT / For the Reporter UNIONTOWN — The Vincent Yellow Jackets rolled into Uniontown Friday night and won... read more