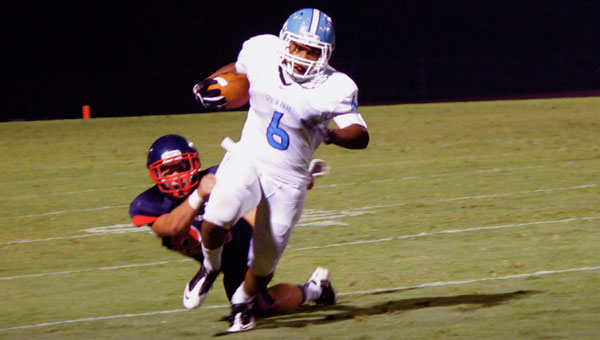 NORTH SHELBY — The Spain Park Jaguars came into Oak Mountain and took down the Eagles 28-10 in an AHSAA 6A, Region 6 showdown Sept. 16, and it wasn’t at all the way Oak Mountain head coach Jeff Harris had pictured it.

“We had a great week of practice coming in and didn’t see this coming,” Harris said. “We looked like we weren’t ready to play.”

Spain Park (3-1, 2-1) fired first, going up by 14 in the first quarter on a 15-yard touchdown run by senior Sean Mardis with 9:22 remaining in the quarter, followed by a 34-yard touchdown pass by junior quarterback Nick Mullens, hauled in by senior Ashton Daniel.

Jaguars senior Destin Challenger picked off a Mickey Forrest pass to give Spain Park possession, but the Eagles’ defense stepped up as junior Tommy McGowan sacked Mullens on third down to end the first quarter.

The Eagles (1-3, 0-3) finally got on the board after a 79-yard run from senior Bradley Bostick set up a 21-yard field goal by senior Mitch Mathias with 8:49 remaining in the half.

Oak Mountain’s defense made another huge stop as McGowan and junior Jake Kelly sacked stopped Jaguars senior Trudarius Clark on fourth down, giving the Eagles the ball on their own 34-yard line mid-way through the second quarter.

The second half proved a defensive showdown as Oak Mountain came out strong with senior linebacker Chris Jones stopping the Jaguars on fourth-and-1 at the Eagles’ 21-yard line. Spain Park quickly got its groove back as Mardis ran in a 43-yard touchdown to put the Jaguars up 21-3 with 3:22 remaining in the third quarter.

Spain Park’s defense stepped up big as it stopped Eagles sophomore quarterback Mickey Harris on fourth-and-inches at the Jaguar’s 1-yard line, but the Jaguars went three-and-out on the next drive, and senior Jakaryus Redwine returned a Spain Park punt 43 yards for a touchdown with 8:47 remaining in the game.

“Making plays – that’s all it is.” Brown said. “It feels good to do something for my team to help them out.”

Brown blocked a 31-yard field goal attempt by Oak Mountain and sealed the victory for his team by picking off a Mullens pass with just 3:31 remaining in play, returning it 28 yards for a touchdown.

“I feel very embarrassed,” McGowan said of his team’s loss. “I think we can build off of it, but there’s a lot of mistakes we have to correct.”

Although Harris said his defense “fought very hard,” he said the biggest hurdles were mental errors and penalties.

While Spain Park head coach Chip Lindsey highlighted the efforts of the Eagles’ defense and offensive line, he said he was “overall just pleased” with his team’s effort.

Lions wear down Hornets in rivalry