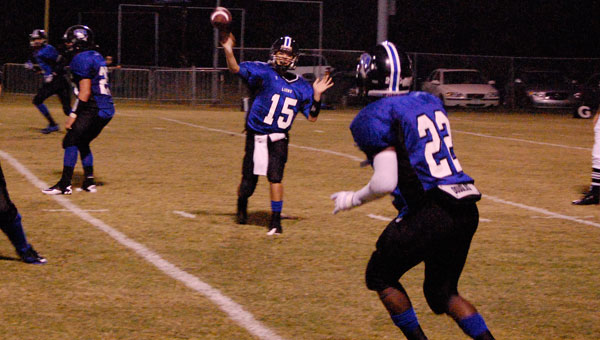 ALABASTER — After opening the game with a quick drive down the field to take an early lead, Kingwood Christian could not handle Evangel Christian Academy defense as the Lions went on to lose the game 41-6 to move to 2-3 on the season and 0-2 in AISA Class 3A, Region 2.

Kingwood had the game well within reach throughout the first half. After a great opening drive capped off by a 20 yard pass from Quarterback Gavin Sumrall to Montez Hayes to take a 6-point lead over Evangel Academy. After forcing punts on all of Evangel’s drives in the first quarter, Kingwood had most of the momentum in the game.

Two plays into the second quarter, Sumrall threw his first interception of the game and it was returned 30 yards to take the lead and some of the momentum back from Kingwood. After turning the ball over two more times in the second quarter, Kingwood’s defense kept Evangel out of the endzone for the rest of the quarter to head into the locker room only down by one.

After halftime, Evangel Christian Academy came out and took the game over. On their first drive of the second half, they drove 71 yards down the field to score and take a 13-6 lead over the Kingwood Lions. Two plays into Kingwood’s first drive of the second half, Evangel forced another interception, but the Kingwood defense, again kept Evangel from scoring.

Heading into the fourth quarter, Kingwood was still in reach of Evangel and had the game in their hands. The Evangel Lions forced a punt and proceeded to take the ball down the field 93 yards to take a 21-6 lead. After forcing another punt and interception, the Evangel Christian Academy Lions went on to score three more times in the fourth quarter, including one 63 yard run to seal the victory with a little over a minute left in the game.

Kingwood finished the game with only 167 total yards of offense, with most of those coming in the first quarter, the Evangel Christian Academy Lions forced a total of five turnovers in the game and 342 yards of offense.

Kingwood will go on the road next Friday night to take on East Memorial Christian in a AISA Class 3A, Region 2 match-up.

Spain Park junior Kevron McMillan attempts to escape a tackle by an Oak Mountain defender during a Class 6A, Region... read more