Luck runs out for Trotter, Auburn 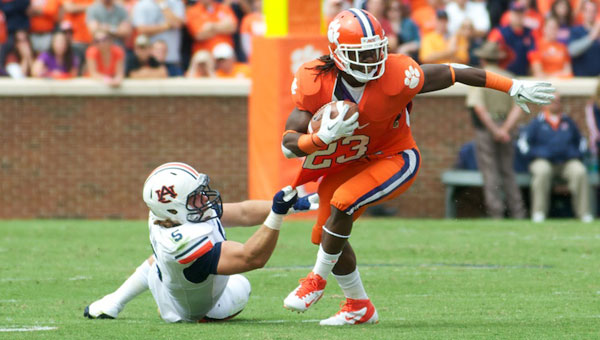 The former Briarwood Christian School quarterback completed 12 of 25 passes for 198 yards, one touchdown and one interception, but Clemson’s defense brought the heat, and the constant pass rush was enough to stop the defending national champions short of their 18th-straight victory.

“All the glory goes to God,” said Pelham High School graduate and Clemson head coach Dabo Swinney. “He has a funny sense of humor. It’s only fitting that an Alabama grad would be in charge of the team that ended the winning streak.”

Auburn looked strong to start the game, going up 14-0 in the first quarter on a 52-yard touchdown run from  sophomore Michael Dyer paired with a 36-yard pass from Trotter to junior Emory Blake.

Clemson’s Tajh Boyd completed a 4-yard touchdown pass to DeAndre Hopkins early in the second quarter, but Auburn fired back with a 1-yard touchdown rush from Dyer.

From then on, it was Clemson’s ball game. Boyd threw a 6-yard touchdown pass to Dwayne Allen, and Andre Ellington tied the ballgame with a 2-yard touchdown run to close out the first half.

Clemson’s offense had its way with the Auburn defense, totaling 625 yards.

“They did a great job converting, and we did a poor job stopping them,” Auburn head coach Gene Chizik said. “The third downs haunted us.”

Dyer carried the ball 15 times for 151 yards and two touchdowns. Travante Stallworth led the team with a career-high five catches for 71 yards.

“We have a locker room full of young men that are very disappointed, but I fully expect us to bounce back and work this week to be a better football team,” Chizik said. “They are going to have short memories and learn from what we didn’t do well, which is a lot of learning because we didn’t do a lot well. I fully expect them to be there tomorrow ready to go and ready to practice and figure out a way to get better. That’s not an option.”