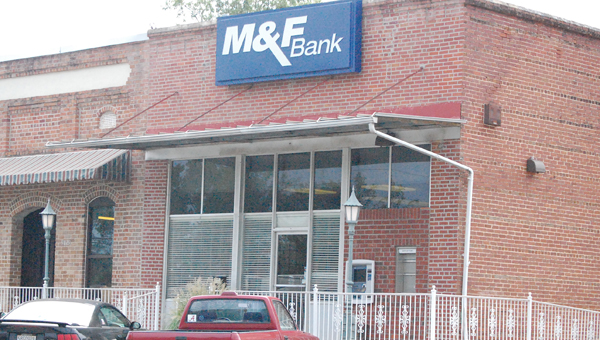 WILSONVILLE – The Wilsonville branch of M&F Bank will close by the end of the year, company officials announced last week.

The Wilsonville branch is one of six branches that will close or be sold as part of Project McKinley, “a comprehensive strategic performance initiative,” according to a press release from M&F Corporation.

The Wilsonville branch is located at 9833 N. Main Street.

“This plan will prepare us for the future,” M&F Corporation President and CEO Hugh Potts Jr. wrote in a press release. “Our intent is to focus our best in fewer locations to achieve higher levels of performance and efficiency. The operations and customer accounts of affected branches will be consolidated with nearby branches so we expect only positive service quality impact.”

Other closings include branches in Oxford, Miss., Tupelo, Miss., Jackson, Miss., and Ridgeland, Miss. A Niceville, Fla., branch will be sold to First Florida Bank near Destin, Fla.

The closures and sale should be complete by the end of the fourth quarter, according to the press release.

The company said it would reduce overall staffing by 11 percent to save about $4 million annually.

Once the Wilsonville branch closes, M&F will have four branches in Shelby County: Columbiana, Chelsea, Inverness and Pelham.