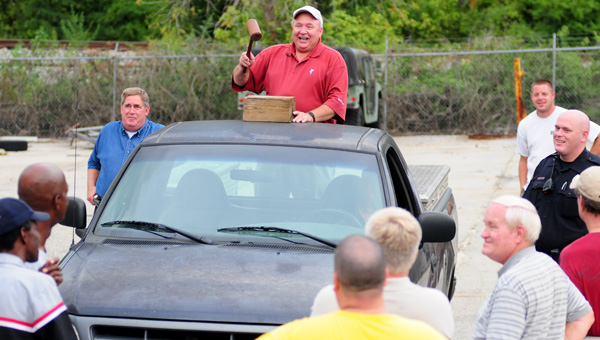 More than 50 people from several states flooded Pelham’s municipal garage off Old Tuskaloosa Road Sept. 22 as they jockeyed to go home with a deal.

The city held its second live auction of city surplus property since 2009 beginning at 5:30 p.m., and sold everything from a washing machine to a 1986 Chevrolet pickup truck.

During the auction, Pelham Mayor Don Murphy stood in the back of a blue Ford F-150 pickup truck and slammed a gavel against a wooden block on the truck’s roof as he and the potential buyers moved from piece to piece.

Pelham City Clerk and Finance Director Tom Seale said the city conducts its own auctions to save money. 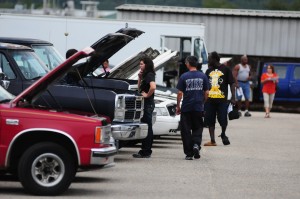 Visitors to the auction look over the cars for sale. (Reporter Photo/Jon Goering)

“We have had outside companies come and offer to do it for us, but they usually charge 10 percent or more,” said Seale, who jotted down buyers’ information after each item was sold. “This is only the second time I’ve done this. The last one was in 2009, and I think the city made about $23,000 then.”

Buyers’ vehicles lined both sides of Old Tuskaloosa Road, many of them bearing license tags from Florida and Georgia. Some of those in attendance had already inspected the items for sale before the auction, as city officials allowed potential buyers to look over the property in the days leading up to the event.

“I came by at 11:30 this morning, and there were about six people out here looking at it then,” Seale said.

Murphy frequently joked with the crowd as he called out the bids for each item. A commercial air conditioning unit sold for $375, a pair of pickup truck camper shells sold for $35 and a decommissioned police department 2005 Ford Crown Victoria sold for $1,900.