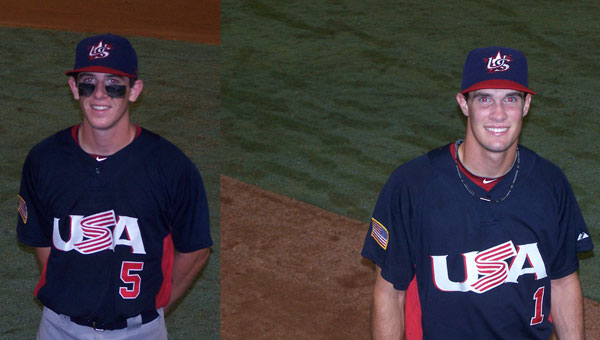 What started as 144 hopefuls has been narrowed down to a team of 20, and two of Shelby County’s finest made the cut.

“It’s always been a dream of mine to make this team,” Dahl said. “It finally came true. I made it.”
Dahl and White traveled to Cary, N.C. on Sept. 12 to complete tryouts for the team. During the week, the training team practiced and played four games against local college squads. After topping UNC-Wilmington 9-2 on Sept. 17 to round up tryouts, players were brought into the coach’s office one-by-one to hear the final verdict.

“I was one of the last guys to go in,” White said. “I was really nervous. I went into the coach’s room, they told us we made the cut and told us what we needed to work on. It was a big relief that all my hard work had paid off.”

Both Dahl and White have returned home and will remain until they meet the team in Miami to train and compete in exhibition games Nov. 9-15. They will then head to Cartagena, Colombia to represent the United States in the 2011 COPABE’AAA’/18U Junior Pan American Championships Nov. 17-27.

The team is led by manager Scott Brosius, a three-time World Series champion with the New York Yankees and the 1998 World Series MVP. Brosius is in his fourth season as head coach of the Linfield College (Ore.) baseball team.
While Dahl and White have their senior seasons to look forward to, both say they are eager to gain the experience participating in a national team provides.

“With the level of play that these guys play with and the knowledge they have of the game, you can learn something from each guy every day, and that’s really helped me,” said White, who is looking forward to having “that international experience” when the team travels to Colombia.

Having played since they were young, both have major league aspirations, but say their motivation stems from the simple love of the game.

“The game is about failure and how you can handle it,” Dahl said. “I try to go hard every play and not take days off.”