Serving his country, serving up tackles 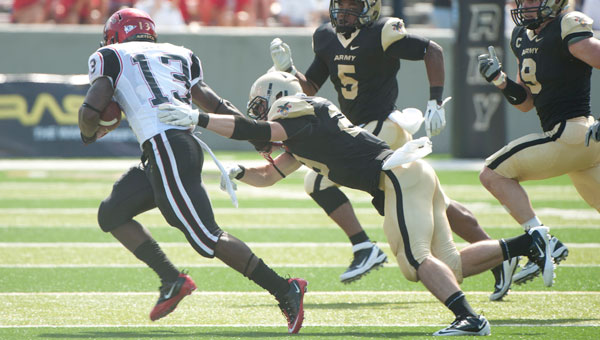 Whether the task of the day is protecting his nation, the end zone or his grade-point average, Thomas Holloway has it all covered.

The former Oak Mountain High School football standout, who maintained above a 4.0 GPA throughout high school, was invited to enroll at the United States Military Academy based on academics and, a year after walking on to the team, is making an impact on the field in just his sophomore year with the Black Knights.

Holloway, who plays safety, has recorded 11 tackles in the first three games of the 2011 season.

Although he said West Point “wasn’t about the football,” Holloway, who started playing football in the second grade, always had ambitions to play at the collegiate level, and during the basic training portion in June before his freshman year, Holloway decided he wasn’t ready to give up his dream.

“I ended up trying out for the team,” Holloway said. “I didn’t want to pass up the opportunity.”

Holloway was among a handful of players selected to participate in training camp, and he made the roster as the seventh-string safety.

A year later, he has quickly worked his way up the depth chart. Holloway recorded six tackles in the Black Knights’ season opener Sept. 3 against Northern Illinois University, adding three more stops during Army’s Sept. 10th match against San Diego State University and two at home in a Sept. 17 win over Northwestern University.

“But to tell you the truth, I was more gratified than proud because it was all Thomas’ hard work,” said Holloway’s father, Jeff. “It made me happy that someone as dedicated and hard-working as Thomas actually reaped some reward for that hard work.”

But Holloway, who seems to glide through challenges with ease, said balancing school, service and football is no cakewalk.

“It’s tough,” Holloway said. “Sometimes I’m like, ‘It could be easier if I was somewhere else,’ but I couldn’t be happier. This is the best option for me because I get to serve my nation.”

Holloway said his drive to serve comes from stories he heard about his grandfather, who served as a major in the 25th infantry in Vietnam.

“My dad always talked about how great of a man he was,” Holloway said. “I knew he had great character, but I knew a lot of it had to do with him being in the Army. I always wondered, ‘Am I ever going to hold myself to that high of a standard?’”

However, those who know Holloway best say that he has always maintained that high sense of temperament and poise that was admired in his grandfather.

“He is a very high character guy,” said Oak Mountain football coach Jeff Harris said of Holloway, who was a three-time letterman with the Eagles and captain of the squad during his senior season in 2009. “On the field, he wasn’t a ra-ra guy from a verbal standpoint. He led by example through his actions, not his words.”

It seems Holloway’s success both on and off the field is a result of finding the strength within himself.

“I would say it has a lot to do with confidence,” Holloway said, “and just a part of rowing up at the Academy. It’s really difficult to get through this place without confidence. It’s a matter of believing in yourself and not giving up.