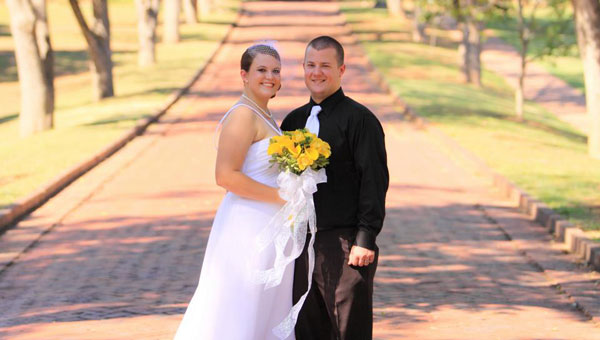 Terri Slocumb and David Dickison of Helena are proud to announce the marriage of their daughter, Amber Dickison, to Nate Janchus of Alabaster.

The bride is the granddaughter of Robert Tidwell and Eve Milican and the late Edwin and Polly Dickison. Amber attended Pelham high school, and she holds a bachelors degree in family and child studies from the University of Montevallo.

The groom is the son of Steve and Barb Janchus. He is the grandson of Forrest and Gila Risberg and Betty and the late Robert Janchus. Nate attended Thompson High School and holds a bachelors degree in political science from the University of Montevallo.

June Long was the matron of honor, and Christi Cowan was the maid of honor. Bridal attendants were Lauren Doss, Melissa Scheiring, Ann Peyton and Jessie Watkins. Flower girls were Tamsyn Gibbs and Morgan Shaneyflet.

The bride carried yellow calla lilies wrapped in white and orange ribbon. She wore a custom halter dress accented with pearls and beads in the front. The bridesmaids wore tea-length yellow halter dresses. The row was lined with flowers and ribbons.

Bell-Bullard Tammy Bell and Tim Bullard, both of Columbiana, would like to announce their wedding on Sept. 3, 2011 in... read more