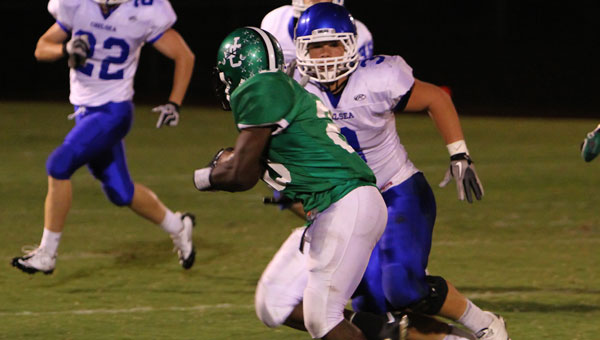 HOMEWOOD — After a heartbreaking loss a week ago, Chelsea High School bounced back in a big Sept. 23 as the Hornets beat the John Carroll Cavaliers on the road 34-13.

On the first drive of the game, Jake Ganus led the Hornets down the field 77 yards. After a 26-yard pass to J.R. Appling set up first-and-goal, Ganus ran it in from 9 yards out to help Chelsea take an early lead over the Cavaliers.

As the Chelsea defense took the field, they had to forget about their struggles the week before, and they did. After forcing a three-and-out, John Carroll faked a punt for a first down. But, the defense stepped up and took the ball back over on downs as the Hornets forced another fourth down and a stop.

As Chelsea took the ball back on its own 30-yard line, a few penalties set up a huge third down play for the Hornets. But after another huge pass from Ganus to Appling, it set up fourth down with 1 yard to go. Chelsea coach Wade Waldrop kept his offense on the field to get the first down and make a statement early in the game.

Ganus pushed ahead and got the first down. Six plays later, Ganus found the end zone again to give Chelsea a 14-0 lead late in the first quarter.

After forcing John Carroll to punt, on the very next play the Cavaliers forced the first turnover of the game and got the ball on Chelsea’s 21-yard line. After a big 20-yard rush by Khoury Marable, the Cavs were on the Hornets’ 1-yard line knocking on the door.

But the Hornets’ defense stepped up again, forcing three plays for a loss and only giving up a field goal.

Early in the second quarter, Chelsea turned the ball over on downs and it was time for John Carroll to capitalize. The Cavaliers drove down the field 68 yards and ate up over six minutes on the clock before finally finding the end zone to narrow the lead to four points.

Chelsea was quick to answer back. This time, running back Austin Washington was the one leading his team down the field. After a 16-yard gain, Washington busted free on first down to find the end zone from 26 yards out to push the lead to 10 points.

Chelsea ended the quarter and a quick drive down field with a huge sack by Davis Shoemaker to run the clock out. The play was a great momentum swing for the Hornets as both teams headed into the locker room.

Both teams were forced to punt on their opening drives of the second half, and Chelsea fumbled the ball again on their second drive. But the defense stepped in once again to only allow three points.

On the next drive, Ganus found the end zone once again to take the lead to 14 points.

The Hornets’ defense stopped John Carroll on a long drive that went deep into the fourth quarter. Once again, Ganus stepped in to lead his team down field and found the end zone to seal the victory for the Hornets.

“We still made a lot of mistakes tonight, but we are very grateful for a win on the road,” Waldrop said.

Chelsea ended the game with more than 400 yards of total offense, with 253 of those yards coming from Ganus. The Chelsea defense held John Carroll to only 195 yards of offense.

The Hornets are back on the road to Pinson Valley next week for another region showdown.

Evangel Christian School running back Josh Flanders tries to break away from a pair of Evangel Family defenders in the... read more