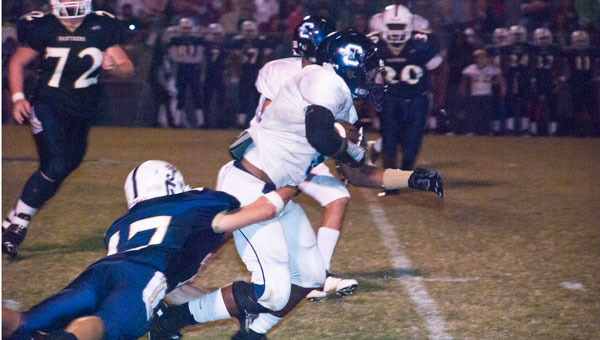 Calera High School running back Sam Adams tries to break away from a Jemison defender in the Eagles' loss Sept. 23. (Contributed/Justin Averette)

JEMISON — No one was surprised that the Calera High School Eagles battle with Jemison had some offensive fireworks Sept. 23.

However, no one expected a touchdown on the second play from scrimmage and then two more in the game’s first two minutes.

Big plays were common throughout the game — and on both sides of the ball for Jemison — giving it a comfortable 50-16 win over neighboring Calera.

Javae Swindle nearly scored on the first play from scrimmage, running down to the 9-yard line. He did find the end zone on the next play to put Jemison on the scoreboard. The Panthers would score fast again off a 52-yard run by Swindle.

Calera responded with a big play of its own, a 69-yard touchdown reception by Ronnie Clark to tighten the score with 9:52 to go in the first quarter.

Inevitably, the pace did slow down some as Jemison’s defense took control, particularly in the second half.

Swindle continued to march on, though, and scored his second touchdown of the game off a 2-yard run late in the first quarter to put the home team up 21-7.

Calera running back Sam Adams would be the next to score off a 45-yard run. The extra point was no good leaving things at 21-13.

Then Swindle would again find the end zone for the third time Friday via a 9-yard run. He didn’t play in the second half after an apparent shoulder injury.

Right before the break, Calera added a 30-yard field goal off the leg of Francisco Garcia to put the score at 28-16.

The second half would belong all to Jemison, particularly its defense.

B.P. Reeves recovered a Calera fumble on the kickoff that ultimately led to a 28-yard field goal by Cruz Martinez.

Calera would try to get things going on their next possession but had that drive end by an interception in the end zone by Trahe Smith.

Jemison would go on to score two more touchdowns on offense on a 24-yard pass from Tre Bryant to Randy Satterfield and a 7-yard run by Kevin King.

On Calera’s next drive, Smith would get his second interception of the game, which corrected a Jemison fumble and turnover on the previous play.

Joseph Hall also had an interception in the game, while King made several key plays and had multiple sacks.

Jemison put a period on the game with an Eddie Hubbard interception for a touchdown with less than a minute to go. The pick, from 72 yards out, capped scoring for the night.