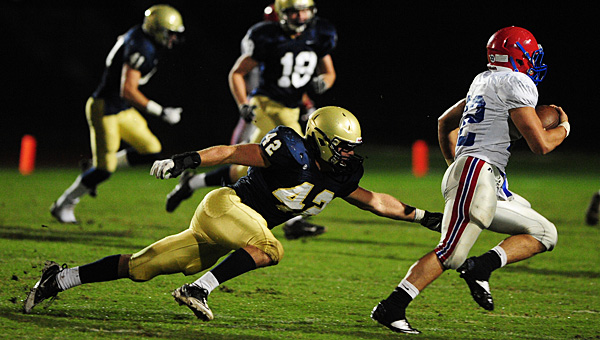 He doesn’t care about the fact the loss won’t have any implication on the Lions’ region championship and state championship hopes.

The veteran coach isn’t about to let his players move on to their next Alabama High School Athletic Association Class 5A, Region 5 game Sept. 30 against Talladega without taking plenty of time to reflect on a disappointing loss Sept. 23 to the Rebels.

“I’m not ready to put this behind us,” Yancey said. “We need to learn from it.”

The Lions learned the Rebels’ 1-3 record entering the game didn’t accurately portray the strength of the visiting team at Lions Pride Stadium.

Vestavia Hills senior Georgie Salem rushed for 230 yards and three touchdowns, including an 80-yard scoring run on the first play of the game, to help the Rebels hand Briarwood Christian its first loss of the season.

“We never even touched him,” Yancey said. “It was a poor performance for our defense.”

While the Lions’ defense struggled to contain Salem, the Briarwood Christian offense had trouble finding a rhythm.

Senior quarterback Ben Craft completed only 19-of-38 passes for 193 yards with one touchdown and one interception in the loss. Craft also rushed for 54 yards and a touchdown on 22 attempts.

Following Salem’s touchdown run on the first play from the line of scrimmage, the Lions (4-1) managed only one first down before the Rebels forced a Briarwood Christian punt.

Senior defensive back Chad Davis recovered a fumble on the Rebels’ first offensive play following the punt, which set up the Lions at the Vestavia Hills 11-yard line.

Following a pair of penalties, Craft capped a short scoring drive with his 1-yard touchdown run with 7:57 left in the opening quarter. Senior kicker Benson Mulvaney added the extra point to tie the game at 7-7.

The Rebels answered quickly, with Salem darting into the end zone fro 27 yards out with 6:07 left in the first quarter to give Vestavia Hills a 14-7 lead.

Following another punt by the Lions, Vestavia Hills quarterback John Cole found James Laughlin open for a 5-yard scoring strike to give the Rebels a 21-7 advantage with 10:04 remaining in the first half. The touchdown reception capped a 12-play, 80-yard scoring drive for the Rebels.

Vestavia Hills pushed its lead to 28-7 following a 48-yard touchdown run by Salem with 2:17 left in the second quarter. The Lions tried to answer with a touchdown of their own late in the first half, but Craft’s pass attempt on a third-and-2 from midfield fell incomplete in the final seconds of the half.

Briarwood Christian’s opening drive in the third quarter showed promise, but the Lions came up empty when Craft’s pass attempt fell incomplete on fourth-and-6 from near midfield.

The Rebels pushed their lead to 35-7 with 3:42 left in the third quarter following a 26-yard touchdown run by Josh Ellington.

Briarwood Christian responded with a 11-play, 75-yard scoring drive, capped with a 27-yard touchdown pass from Craft to Smith, with 42 seconds remaining in the third quarter. Mulvaney cut the Rebels’ lead to 35-14 with his successful extra point.

After forcing a punt by the Rebels early in the fourth quarter, the Lions’ fate was sealed when Cole Pearson came up short on a fourth-down rushing attempt inside Vestavia Hills’ 30-yard line late in the game.

Senior linebacker Roy Gilbert said the Rebels’ touchdown on their first play in the game put the Lions in an early hole and they couldn’t recover.

“I think we came out kind of slow,” Gilbert said. “We’ve got to work on our assignments this week in practice.”