Shelby County ‘pinks out’ in October 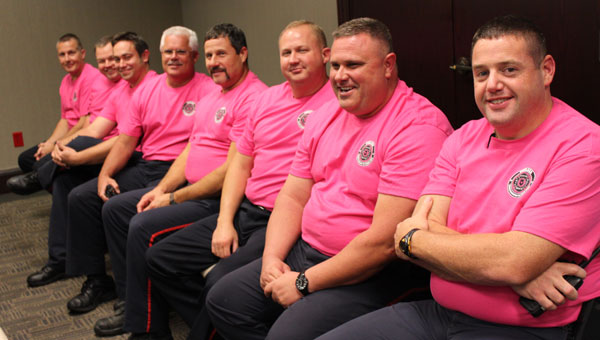 The communities of Shelby County aren’t taking breast cancer awareness sitting down. For the month of October, many of the county’s schools and municipalities are going out of their way to celebrate breast cancer survivors, recognize affected families and raise money and awareness for different cancer foundations.

The Chelsea Fire Department and the City of Chelsea care enough to wear pink as they work together to raise money for the Breast Cancer Research Foundation of Alabama.

“What if we could get everyone to wear pink on one particular day?” was the question that kicked off the campaign, said Kathy Shirley, wife of Chelsea Fire Chief Wayne Shirley.

Kathy Shirley, along with Liz King and Pam Scaira, began to find more and more support within the Chelsea community, and the fire department’s involvement only heightened the popularity of the $15 pink T-shirts, which 100 percent of proceeds will go to the foundation.

“You see people wanting to wear fire department stuff because it’s cool. There’s a certain machismo in that,” Shirley said. “It appeals to people’s sense of community, it was a domino effect.”

Chelsea Mayor Earl Niven declared Oct. 7 as Chelsea Turns Pink Day during the Sept. 20 city council meeting where the entire city council and a group of firemen donned the bright pink T-shirts being sold by the fire department and Chelsea schools and businesses. During the Oct. 7 Chelsea High School home football game, fans are encouraged to wear pink to the 7 p.m. game.

During Chelsea High’s homecoming week, the cross-country team will sponsor a donut dash on Oct. 18, where students will donate $10 to run a lap and then eat a donut. If a student can run 12 laps and eat 12 donuts in between “without refunding, they’ll get a special prize,” said Coach Wayne Trucks. All proceeds will be donated to the American Cancer Society.

Spain Park High School will “pink out” during its football game on Sept. 30.

The Calera Chamber of Commerce is also selling T-shirts and pink ribbons to raise money for the Breast Cancer Research Foundation of Alabama, where all proceeds “stay here in Alabama at UAB,” Chamber President Gail Blankenship said.

“For Calera’s last home football game (Oct. 28), we’re going to do a little candlelight in memory (of cancer survivors). Everyone’s supposed to wear pink,” she said. “All stores in Calera are doing pink ribbons for $1.”

Hot pink T-shirts for $10 will be for sale at the Chamber office, First United Security Bank, Barbara’s Candles, city hall, the fire and police departments and Calera High School.

“Like all communities, it touches a lot of people. The school has gotten really involved. The T-shirts were designed by a boy at the school art department,” she said.

Additionally, the Calera Chamber is holding a Calera Goes Pink golf tournament at Timberline Golf Club to benefit the Breast Cancer Research Foundation of Alabama Nov. 3 at 9 a.m. For more information, contact the Calera Chamber at 668-3023.

“We’ve very excited at Calera High School to be involved,” Principal Richard Bishop said. “It teaches kids the value of helping others. Four out of five women survive breast cancer. Twenty years ago, only one out of five survive. Those facts were given to us by the Breast Cancer Foundation.

“I think it’ll be good awareness for our students how much progress we’ve made for breast cancer research,” he added. “Hopefully we’ll get it to the completely cure.”