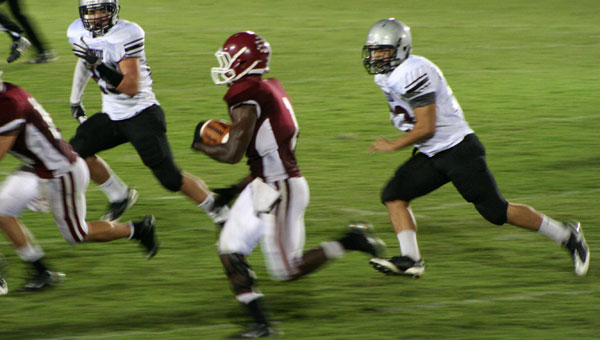 COLUMBIANA — The Southside-Gadsden Panthers rolled into to Columbiana and dealt the Shelby County Wildcats a numbing 17-14 loss Sept. 23.

With the brisk, cool air swirling through Papa McCombs Stadium, the Wildcats, coming off their first win of the season, were looking for another win to catapult them through the midway point of the season.

On the opening possession, the Panthers went left, right and up the middle to the tune of a 12-play, 68-yard touchdown drive that was capped off by a scoring run from the 5-yard line. One possession in, six minutes had lapsed and the Panthers held the 7-0 lead.

The Wildcats answered on the ensuing possession when a 44-yard Ty Proctor toss connected with Evan McNeal to set the Cats up at the Panthers’ 10-yard line. On a crucial fourth-down attempt, Proctor found McNeal again for a 7-yard scoring strike.  After the failed 2-point conversion, the Cats trailed 7-6 with 29 seconds left in the first quarter.

Forcing a Southside punt after a four-and-out series to open the second quarter, the Wildcats were back in business starting from their own 30-yard line. Seven plays into the drive, Wildcat fullback Brent Wooley took the handoff between the guards and shook a defender en route to a 39-yard scoring run. After a Denzel Williams 2-point conversion, the Cats led 14-7.

With ample time remaining in the first half, a 25-yard field-goal attempt fell short for the Panthers, while a Wildcats’ drive was stalled at their own 49-yard line to go into the half.

The offenses sputtered for both squads coming out of intermission as they traded punts until the Panthers brought the score to 14-14 when they connected on a 17-yard scoring toss and point-after-attempt.

Despite a 47-yard Southside field goal that hit the crossbar midway through the fourth quarter, there was still time for the Cats to respond. The pendulum of opportunity was heavy in the Wildcats’ favor.

After a 42-yard return by McNeal, the Cats seized prime real estate at the Panthers’ 42-yard line. One play later, the pendulum stick was fractured when the ball found its way to the moist turf before being recovered by the Panthers.

A final drive was stalled at the Panthers’ 14-yard line. With no timeouts to spare and having to signal in plays in rapid fire, one last shot from within the red zone was too much to overcome.

Offensively, the Cats tallied 191 yards on the ground and 64 through the air. Proctor finished the night 4-of-9 passing with one touchdown.

Montarious McGregor led all rushers with 71 yards on 11 carries.

At times, the Wildcats’ defense just couldn’t seem to get off the field in crucial third-down situations as the Panthers converted on 8-of-14 attempts.  The Panthers garnered 168 yards on the ground via 37 attempts and 94 yards through the air.

The Wildcats host the Moody Blue Devils for homecoming next week.