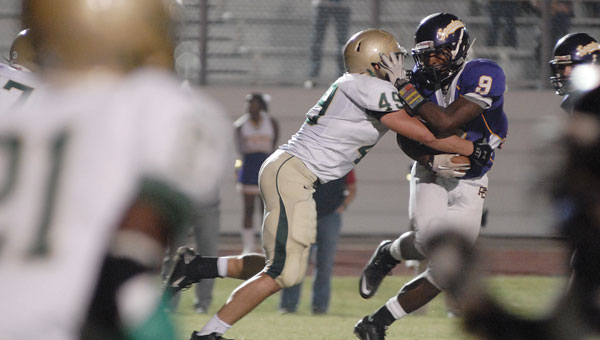 The Pelham Panthers improved their record to 3-2 Sept. 23 as they took down the Pleasant Grove Spartans 27-14.

Pelham racked up 306 total yards on the night, only 30 of which were passing.

“I’m proud of the win, but we’ve got to play with more intensity,” said Pelham head coach Brett Burnett. “We didn’t play with the same intensity we did last week, and we’ve got to get better if we are going to win another game on our schedule.”

The game was delayed for more than 20 minutes in the third quarter as officials waited for an ambulance to arrive on the scene and transport Pelham sophomore defensive tackle Braxton Hoyett to the hospital.

Hoyett suffered a head injury when he collided helmet-to-helmet with one of his teammates, but was moving his limbs before he was transported, Burnett said.

Pelham scored on its first drive, as Kenny Meadows ran the ball in from 20 yards out. John Perko added the PAT to give Pelham a 7-0 lead.

After the Spartans tied it up on their ensuing drive, Pelham struck again when Meadows scored on a 33-yard run. Perko’s extra point brought the game to 14-7.

After recovering a Spartan fumble in the second quarter, Pelham went up 21-7 on a 1-yard Meadows rushing touchdown. Perko again added the PAT to give Pelham a 21-7 lead at halftime.

On its first drive of the second half, Pelham scored on a 1-yard run by Tyler Brasfield. A missed PAT brought the game to 27-7.

Pleasant Grove threatened to mount a comeback after scoring a touchdown with 3:13 left in the game, but failed to convert an onside kick.

Meadows finished the night with 128 rushing yards on 10 carries, and junior quarterback Tanner Adams completed Pelham’s only pass of the night to senior J.T. Ross.