Alabaster could vote on schools Oct. 17 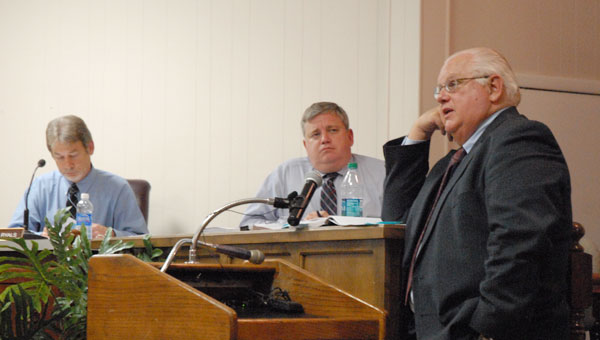 The Alabaster City Council could decide as early as Oct. 17 if the city will split from the Shelby County School District to form its own municipal school district.

The announcement came after the council held its third public meeting Sept. 26 to discuss the findings of a city school district feasibility study conducted by consultant Ira Harvey, who was hired by the council to conduct the study several months ago.

Ward 6 Councilman Scott Brakefield said the Oct. 17 vote date has not been “set in stone,” but he said the council will work to “get it on the agenda as soon as possible.”

During the Sept. 26 meeting, Harvey again told the council an Alabaster board of education likely would have about $2,302 in unencumbered funds to spend per student.

Harvey said the Shelby County School District currently has about $2,078 per student in unencumbered funds.

Harvey said, if the city split from the county, the city would take ownership of every school building in Alabaster’s current city limits, including the Shelby County Instructional Services Center off U.S. 31.

He also suggested the city raise its sales or ad valorem property taxes to generate about $4 million per year to fund extra teacher units, new buildings, transportation needs and to make other school improvements.

“If these (improvements) were funded, you would have a fiscally sound system, and a system that would be envied by other systems in the state,” Harvey said.

During the public input portion of the meeting, four speakers said they were explicitly in favor of an Alabaster school system, and three speakers explicitly said they opposed the city forming its own school district.

“It is my understanding that we are putting this together on a (financial) razor edge,” Workman said.

Butch Robertson said he was opposed to the city system because it would represent a “duplication of services.”

“I see too much duplication of services. Jefferson County is a total disaster right now because of that,” Robertson said.

Patrick Davis, a teacher at Thompson High School, said he was “very much in favor” of the city forming its own school district, and said city school districts near Alabaster have been successful.

“If you look at the comparison of all the cities around us that have broken off and formed their own school districts, none have come back and said ‘This is not what we should have done,’” Davis said. “I’m not saying our system is terrible. Is Thompson High School a good school? Yes. Could it be better by going to a city school district? Yes.”