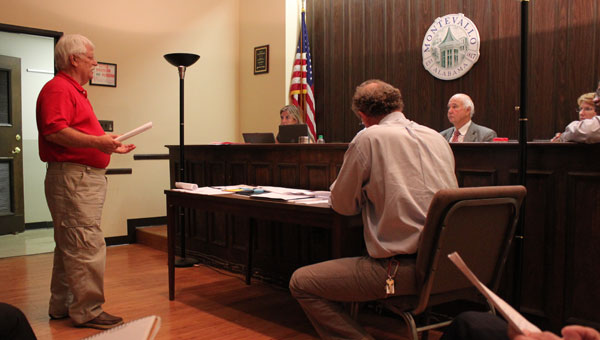 MONTEVALLO – The Montevallo City Council unanimously voted to pass a resolution to increase the city’s general sales and use tax from 3 to 4 percent during its city council meeting Sept. 26.

About 30 Montevallo residents attended the public hearing prior to the meeting to voice their opinions concerning the tax increase.

Part-time Montevallo firefighter and resident Brandon Broadhead said he was concerned about how the city would spend the money.

“Is it the time to spend money on the revitalization of downtown?” he said. “Can these families afford it? Should we spend money on sidewalks or keep police officers on the streets? I don’t have a problem paying an extra penny, but I’m not sure if that’s where the money should go right now.”

“It’s the heart of the city, and when the heart dies, the tentacles die, too,” he said. “There’s no good time for a tax increase.”

Longtime resident Don Hughes asked the council members to call 20 people in their respective districts and ask what the residents think of the sales tax increase.

“I don’t want it (the tax increase) to die. I just don’t think it’s the right time,” Hughes said.

“We keep having people say it’s not a good time. I disagree,” she said. “It’s the perfect time. We have planned until we can’t plan anymore.”

Leanne Reed represented the Montevallo Ministerial Association and supported the tax increase, but requested groceries be exempt from the increased tax. McCrory said the state attempted to exempt groceries from sales tax, but couldn’t find a way to do so.

“We don’t see a way we could pass it (the tax increase) and leave groceries out of it,” McCrory said.

“Timing is indeed everything. I’ve spoken to folks who are longtime members of Montevallo, and they’ve never before seen such an alignment of the university, the city and the county manager,” Stewart said. “(The tax) won’t hurt more than new jobs in town would help.

“I believe our country is at its greatest when it’s building. We need to quit ringing our hands and being fretful … we need to roll the dice a little bit,” Stewart added.

In other actions from the meeting, the council:

-Approved a 9-member Vallocycle Board.