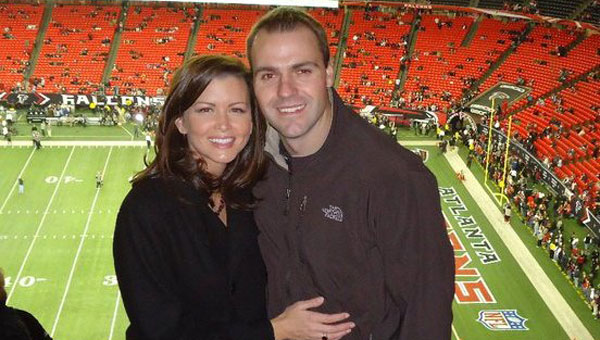 Amy and Caleb Ross may have moved recently to Shelby County, but with Caleb’s new position as Thompson High School’s new head football coach, the couple already feels a part of the community.

The couple moved to Maylene from Prattville when Caleb took his first head coaching job with the Thompson Warriors, Amy Ross said.

“He was at Prattville High school. He was a teacher and assistant football coach there,” Ross said.

Auburn Montgomery graduate Amy and Samford alumni Caleb met in Trussville, where they both grew up, but were both dating other people at the time.

“Months later, we were both single,” Ross said. “My mom was a principal at Prattville High School, and she put it in his ear that I was single. He asked my mom for my phone number.”

The couple married in April 2009. The Rosses don’t have any children yet, but “just a dog,” Ross said.

“It was one of those a friend needed us to keep her for awhile, and four years later we still have her. She loves Caleb,” Ross said with a laugh.

Ross, a paralegal at a law firm in downtown Birmingham, said Maylene reminds her and her husband of their hometown.

“It reminds us both a lot of our hometown. Prattville is outside of Montgomery like Maylene is outside of Birmingham. We don’t want to leave anytime soon. It’s been a shockingly easy adjustment,” she said.

When asked about being the wife of a high school football coach in Alabama, Ross said she enjoys being a part of it.

“I’m not there at practice, but I’m involved through him. It’s wonderful to watch someone you love doing what they love. I’m his biggest fan,” she said. “He’s never around, but I’m used to it. It works for us. When he’s off, he’s present with me. He makes an effort for us to do things when he has the time. I wouldn’t know any other way with him.

“Especially with moving, (being involved with the football team has) helped us with getting to know people,” she added. “The community’s been real welcoming.”

Pelham falls in quarterfinals at Over The Mountain tournament

FROM STAFF REPORTS The Pelham High School volleyball team fell to Bob Jones in the Over The Mountain tournament quarterfinals... read more