A melting pot — of food 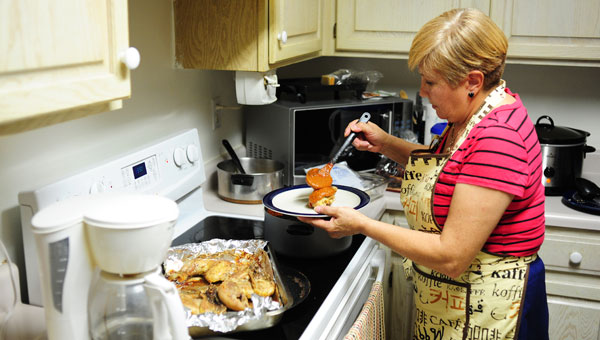 When Sylvia Marshall cooks the food of her native Mexico, she often does so with an American flair.

She enjoys finding ways to combine her heritage with her everyday life as an American citizen in Alabaster. For example, at Christmas, her family fixes turkey and ham just like countless other families in the United States.

However, while the turkey and ham are cooking, Marshall is also fixing traditional Mexican dishes, such as dried cod cooked with tomatoes, garlic, onions, olives and capers. Or she might whip up some cactus, made crisp and juicy by frying it with onion and garlic.

For her and her family, effortlessly bringing together Mexican and American culture through food is just a way of life.

“We always do that. My family is a mix between two cultures,” she said as the smell of smoky ranchero beans permeated her kitchen. “I make this, and I make that.”

“I always come over when I want something real,” Greathouse said. “Yes, I do.”

Marshall’s husband was born in the United States, and after their marriage, Marshall learned some of the secrets of American cuisine from her mother-in-law.

There are some distinct differences between both American and Mexican cuisine and culture, she said.

“Food is going to taste a little bit different. Even beef, pork and chicken taste a little different here than in Mexico,” she said. “There are a lot more processed foods here. There are many more fresh foods in Mexico.”

Oscar Dominguez, a native El Salvadoran who now works with the Shelby County School System’s English as a Second Language department, said he tends to eat more American cuisine, but it’s not because he was happy to leave El Salvadoran food behind. Rather, he just can’t find the right ingredients.

“It’s hard to get the ingredients and stuff you need here, like the cheese we use in El Salvador, or the tortillas,” he said. “Mexican restaurants here are a bad copy — very bad. A friend asked me one day, ‘You are Latino. Why don’t you go to Mexican restaurants?’ I said, ‘Because I like Mexican food.’”

In El Salvador, meals earlier in the day tend to be heavier. Dominguez said a typical breakfast where he grew up could be cheese, fried beans, steak, fried plantains and tortillas.

Marshall also said dinner in Mexico tends to be a light affair, while lunch is a much heavier meal.

Her love of cooking comes from her relatives — her mother, grandmother and aunt. Her mother hailed from Jalisco, while her father was from Puebla, so she learned recipes from both of those Mexican states.

She has made some necessary changes to the recipes, though.

She substitutes many ingredients she can’t find here, and with family members suffering from diabetes, she opts to bake instead of fry most foods. After all, family is the reason she puts so much care into her food.

“I enjoy when my family enjoys the food I cook. When you cook at home and everybody’s happy, that’s a reward,” she said. “You get together with the family, the ladies cook and everybody enjoys. It’s one way to keep the family together.”

5 or 6 cloves of garlic, chopped

A good shake of chicken powder

Chopped chilies (as much as you want, depending on the heat level you want)

Gently fry all ingredients, except for beans, in a large pan. Combine fried mixture and beans in a slow cooker and cook on low for 5-6 hours or on high for 2-3 hours. Check the beans often to make sure they don’t dry up and burn. Add small amounts of water as needed. 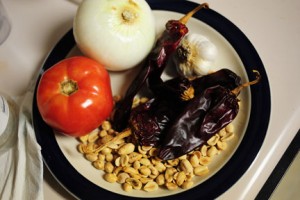 Whole dried chilies (add what you want depending on the heat level you want; Marshall adds 6-7 chilies for a fair amount of spice)

Fry all ingredients together in a little oil; make sure the peanuts don’t burn. Put a small amount of water in a blender and add the fried mixture. Add a pinch of salt and pepper and blend until smooth. Pour a little oil into a saucepan. Pour the blended mixture into the saucepan and place over low heat, stirring constantly and making sure sauce isn’t sticking to the pan. Taste the mixture and add a little sugar, then taste again. Continue to taste and add sugar until the taste is to your liking. Continue stirring until sauce is bubbling. Pour over prepared beef, chicken or pork, and sprinkle with sesame seeds, if desired.

FROM STAFF REPORTS A house fire last week in the 5000 block of Indian Valley Road is under further investigation,... read more