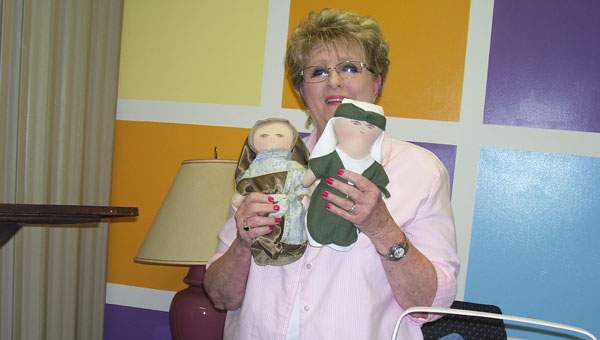 “God gave me such a love for His Word through these people,” said Sue Ingram, who uses Bible character dolls to comfort and inspire others. (Contributed)

“What’s keeping you from God’s plan for your life?”

Sue Ingram said she was 50 years old when she heard an evangelist ask this question.

A short while later, she walked down to her basement and looked around at the idle sewing machines, where she had once run a sewing factory. “Lord, can you use sewing machines?” she asked.

She immediately saw, in her mind’s eye, little Bible people.

She didn’t know how she could fulfill God’s plan with dolls, but she understood that she was to make them.

First, though, she needed to learn more about people in the Bible.

She had taught Sunday school for years, but usually read only scriptures that related to her lesson, she said. She had never done regular Bible study just for herself. Now, though, she began digging into the Old Testament.

“And I began to understand that these people — Abraham, Isaac, Jacob … all of them — are real people,” she said. “I made Abraham first because he is our spiritual father.”

After Abraham, she made his wife Sarah and other Bible people. Thus began a wonderful ministry with what she dubbed Covenant Kids, “because they are God’s covenant people.”

In the beginning, she sold them or gave them away to people according to their character traits, she said. Sarah, thought barren until God gave her Isaac, was given to women unable to conceive, while David was given to people who were afraid.

After a story about the dolls appeared in a local newspaper, people began asking her to come and speak. So, now she uses the Bible character dolls to tell their stories from the Bible.

“I enjoy sharing my testimony with ladies’ groups because my heart is to get women in the Word,” she said.

Shelba Nivens can be reached by email at Shelbasn@juno.com