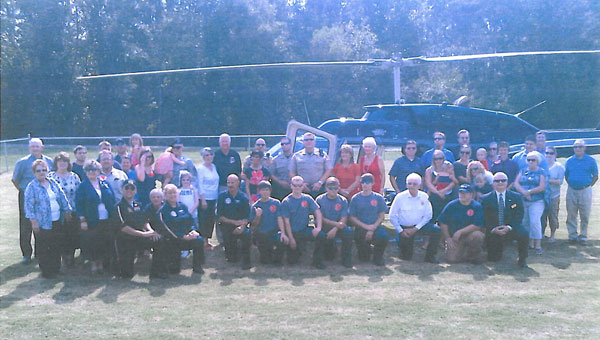 Westover held an event to commemorate the 10th anniversary of 9/11. (Contributed)

As we awoke to the 10th anniversary of 9/11, many churches and towns held special events.

Sunday afternoon of Sept. 11 this year was a special day for residents of Westover and surrounding areas. A memorial event was held at the Westover City Park.

Also in attendance were Shelby County Sheriff deputies, Harpersville Fire Department, members of the Town Council and their families and active military members and veterans.

McLaughlin spoke about his time working in the World Trade Center South Tower, which was the first building to fall, and also gave an inspiring message of hope for all. Active military and veterans who were present were recognized. Brantley shared thoughts of 9/11 and led the Westover Junior Volunteer Fire Fighters into a ceremony as they rang the fire bell 10 times to recognize the 10th year anniversary of 9/11.

Several members of the crowd shared where they were, personal experiences and how that day made an impact on their lives.

It was so inspiring to join with a group of citizens in reciting the Pledge of Allegiance and singing together “God Bless America” led by Chappell. Chappell also rendered a powerful solo of “God Bless the USA.”

The Rev. Wilton Brantley shared scripture and prayer for our communities and nation as a whole.

To conclude the program, a Life Saver helicopter landed, allowing families to get a closer look, take pictures and answer questions regarding its work. The Life Saver crew explained this opportunity is especially good for parents and children alike to familiarize them with the techniques during a rescue situation.

McLaughlin expressed his thanks to all who participated in the event and said he looks forward to several upcoming events planned for the city this fall. Please check the calendar of events at Westoveralabama.org.

Everyone should go to the dentist

By DR. FRED SELF / Veterinarian As humans, we sometimes fail to take proper care of our teeth. The result... read more