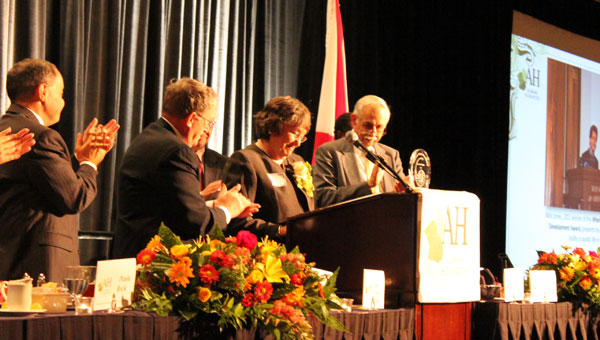 HOOVER – Elaine Hughes described humanities as humanity’s history, language, literature, religion and philosophy, “all of those things that allow us to study and learn more about ourselves.”

Hughes spent nearly 40 years of her life imparting a love of the humanities onto her students at the University of Montevallo as a professor of English. While she championed humanities in her classroom, her efforts were recognized on a statewide level when she received the 2011 Alabama Humanities Award from the Alabama Humanities Foundation at the Wynfrey Hotel on Sept. 26.

According to the AHF, “The Alabama Humanities Award is given annually to honor an individual in Alabama who has made an exemplary contribution to the public understaing and appreciation of the humanities.”

Past recipients of the Alabama Humanities Award were Sen. Richard Shelby, Red Blount, Harper Lee, Sen. Howell Heflin, Emory Cunningham and Jack Warner. “I feel overwhelmed, absolutely overwhelmed. I really do,” Hughes said prior to receiving the award. “I know most everyone on that list (of previous recipients). I know about them. All of those people have been involved in some way in the public domain of trying to promote humanities in this state and nation.”

Hughes served as chairperson of the AHF from 2004-2006, as well as on the board from 2000-2006. She has worked with the AHF since 1978 in “various capacities, primarily in writing grants and service as a humanities consultant for other grant writers, numerous lectures and workshops to spread humanities across the state,” she said.

According to Hughes, the most interesting program she developed was “judging life through literature,” a reading and discussion seminar for 25 Alabama judges.

“The purpose of the seminar was to help bring the humanities into their decisions that they have to make from the bench about people’s lives,” she said.

Wayne Flynt, professor Emeritus of history at Auburn University, presented the award to Hughes at the banquet. Flynt called Hughes a “five-star scholar” and “the epitome of what is best among us.”

Hughes said she believes strongly in humanities because of how they have influenced her personally.