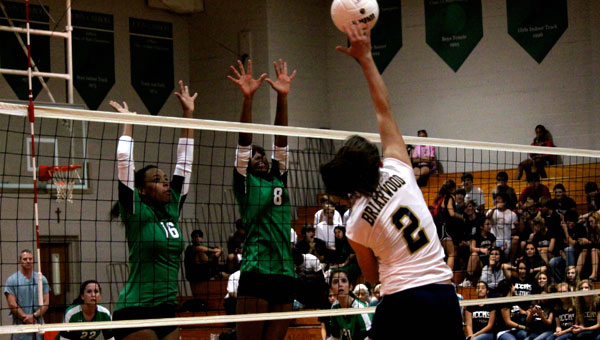 If the Briarwood Christian School volleyball team learned anything in its loss to John Carroll Catholic High School on Sept. 27, it’s that intimidation should never be a factor.

“Honest truth, they saw John Carroll’s warm-up and were intimidated,” Briarwood head coach Tien Le said. “That’s a lesson they had to learn tonight, was that warm-up is warm-up. Just because somebody warms up a certain way doesn’t mean they’re going to play that way, and even if somebody looks great, you still have to believe in what you can do and execute, and we just didn’t do that because we were intimidated.”

“I don’t think we came in mentally prepared,” Briarwood senior Logan Nasworthy said. “I thought it would at least be more of a fight on our part.”

It was rough from the start, as John Carroll pulled away midway through the first set. Three kills from Lauren Palmer, with assists from setter Adeline Reiser, weren’t enough get the Lions out of their hole as the Cavaliers surged to victory with four of their final five points coming from kills.

“The younger girls were definitely intimidated, so it made them nervous,” Lions senior Carly Cline said. “That’s something that really brought down our communication.”

Briarwood fought back, taking the second game, but John Carroll quickly regained control in the third set, taking the game on a kill.

Down 10-19 in the fourth set, the Lions attempted a comeback with a kill from Nasworthy and three services aces from Georgia Muir-Taylor, but they were in over their heads as the Cavaliers clinched the match a few plays later.

“We’re still a young team,” said Nasworthy, who had nine kills, five digs and two service aces on the night. “We have moments of greatness where we just gel and everything is perfect, but then there are tendencies that we still have to work out, just little stuff. “