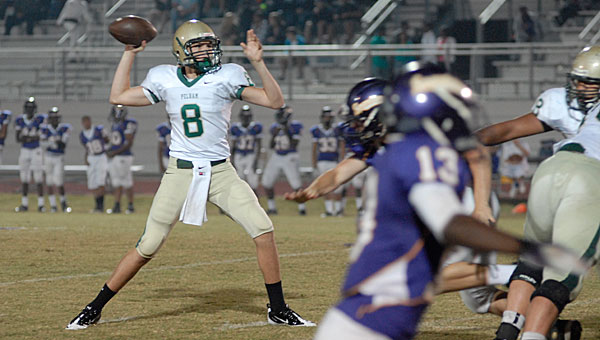 The Pelham High School football team and other athletic programs could be competing in Class 5A a year after the school splits with Helena high school. (Reporter Photo/Neal Wagner)

Pelham High School athletic teams will continue to compete in Class 6A of the Alabama High School Athletic Association for at least a year after PHS splits with Helena high school in 2013, Shelby County School Superintendent Randy Fuller said Sept. 27.

However, PHS could drop to a lower classification when the AHSAA reclassifies schools before the 2014 school year, he said.

“The AHSAA sets the classification based on school enrollment, and they reclassify every two years,” Fuller said.

The AHSAA is set to reclassify schools before the 2012-2013 school year, and will not reclassify again until the 2014-2015 school year. Because PHS is scheduled to split with Helena in the middle of the two-year reclassification period, the Panthers will continue to compete in Class 6A for the 2013-2014 school year.

PHS Principal Bob Lavett previously said the PHS enrollment likely will be cut in half when the school splits with Helena, which will give PHS and Helena high school an enrollment similar to other 5A schools in the area.

“We think Helena will have an enrollment of about 900 or so when it opens,” Fuller said. “But that’s two years off, so it’s hard to tell how those communities will be affected by growth between now and then.”

If the Pelham and Helena high schools both eventually dropped to Class 5A, their athletic teams likely would compete against other area 5A schools, such as Briarwood Christian School, Chelsea High School and Hueytown High School.

Fuller also said school system officials will begin the process of determining the Helena high school mascot and school colors in early 2013, and will seek public input while doing so.

Fuller said the district will survey Helena school employees, students and residents before finalizing the school’s mascot and colors.

“I think they will go through a similar process they did when they opened Helena Middle School,” Fuller said. “They use different methods to get input before making that decision.”