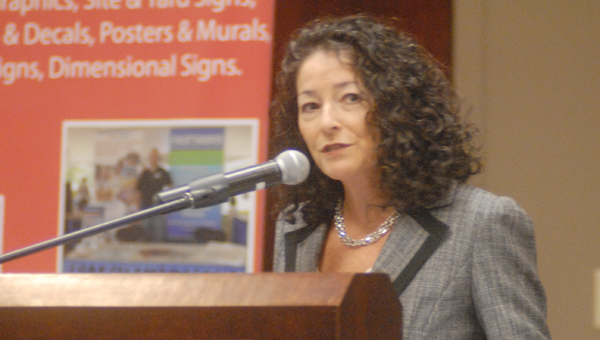 The founder of the Birmingham Business Journal and recent author of the book “Women of True Grit” said companies should show more gender equality to strengthen their bottom line profits.

During the event, Savas said women no longer must worry about a “glass ceiling,” but rather “gender asbestos.”

“It’s more like gender asbestos. It’s in the very walls of our companies,” she said. “But it’s not men’s fault. I get so tired of hearing that. It’s a business issue.”

Savas routinely speaks to and helps businesses looking to learn more about women’s issues, and released her book in 2005.

During the luncheon, Savas said women make up the majority of college graduates, and said they represent $20 trillion of global spending every year.

“We (women) are finding ourselves at a crossroads, and we are dealing with a lot of work-life balance issues,” Savas said. “Women make up 60 percent of all college graduates, and in 10 years it is estimated that 70 percent of graduates will be women.

“MBA schools are advertising to women. That is the only place they lack in graduation numbers, but they are catching up fast,” she added.

Savas said the number of female college graduates is on the rise because of the “different traits” women bring to the workforce.

“I have a 16-year-old son, and I am worried for him,” Savas said. “The girls in his class are outpacing him faster and faster.”

Savas said because of the rising number of female college graduates, companies could benefit from equalizing the gender of their workforces.

“Studies show, and there have been a lot of studies, that gender parity strengthens a company’s bottom line,” Savas said. “There are systems that will work to make that happen.

“There are people like me who will come in and look at a company and help make the bottom line better,” she added. “It’s up to all of us to make a difference and reap what I like to call the gender dividend.”