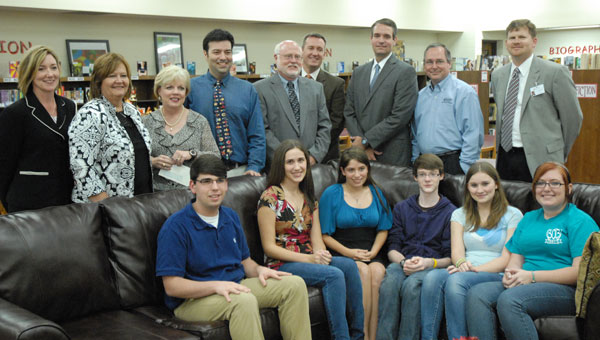 When Thompson High School junior Joe Grice learned state funding cuts had brought his school library’s inventory expansion to a standstill, he knew he and his classmates would have to take action.

“The library has gone three years without funding now,” Grice said. “I think the last updated biography was Bill Clinton.”

“I thought that if they had student input and not just adult input, it may help things out,” Grice said. “I guess it worked out.”

Three weeks after the students sent the letters to the city’s government officials, Frings and several members of the City Council met with the students and school employees to donate a $4,000 check to the THS library.

“I think your letters were very positive and on the mark, and I think they expressed the needs you have,” Frings said during the Sept. 28 presentation. “I know this doesn’t equal the state funding you’re used to receiving, but we wanted to help in any way we could.

“I don’t think anyone on the council even batted an eyelash when this ($4,000 donation) resolution came before them for a vote,” Frings added.

“These kids took the initiative to reach out to their civic leaders,” Stone said. “We are very happy we’ve got students like this at Thompson High School.”

THS Principal Danny Steele said supporting the school library will be important to students’ success in the future.

“The media center will play a much greater role in the future. Success for you (students) is how you utilize the resources available to you,” Steele said. “Adding to those resources is important for the future.”

Stone and Frings said the library soon could create a “wish list” registry at Books-A-Million at the Colonial Promenade. Through the registry, which Stone said could come in the next few months, shoppers could purchase a book as a gift to the THS library.

“We’ve already mailed the request to Books-A-Million, so we are just waiting to get our response now,” Stone said.