Gospel music and the Cash family 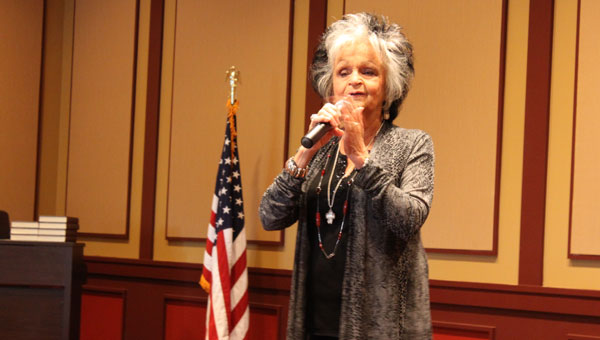 INVERNESS – In 1970, Joanne Cash committed her life to the Lord. Since that day, she’s dedicated her life to ministry and gospel music, carrying on the tradition of her late older brother, Johnny Cash.

Joanne Cash told a group of Danberry at Inverness residents she was a drug addict and alcoholic and almost died twice before becoming a Christian. Cash met her husband, Dr. Harry Yates, at a church, and the couple has been married for 40 years. Together, they started the first cowboy church in America, Nashville Cowboy Church, Cash said.

“For as long as I can remember, there’s been singing in the Cash family,” she told the Danberry residents. “We use to sing in the cotton fields and singing at the church and around my momma’s upright piano after supper.”

When asked about her gospel singing and sharing her faith, Cash said Jesus changed her life when she became a Christian.

Cash said when Johnny first became a “superstar,” he was booked every night of the week for different gigs. Because of this lifestyle, the “body will break down,” she said. During this time, someone offered Johnny “uppers” to help him through his performances. Later in life, Cash said Johnny would say, “The prayers of God’s people brought him out.”

Cash said Johnny’s first Cadillac was pink, and he pulled up to the family’s farmstead and asked his sister if he could take her to one of his shows. Elvis Presley was the front man for that show, and Cash said she talked with him while her brother performed.

“It may have been Elvis who gave him the pill, but I’m not sure,” Cash said.

“Yes, ladies, I did get to meet Elvis, and he was pretty,” Cash told the Danberry residents, “But I married Harry.”

Cash said many people ask her why Johnny wore black.

“He said to me, ‘Baby, black makes me look skinny!'” she said, noting her brother always called her “Baby” because she was his younger sister. “In the 50s, everyone was wearing fancy things, and he never was a fancy person.”

Cash sang three gospel songs during her performance. One song, Johnny wrote while he was on Mt. Olive in Jerusalem. She concluded with an acapella version of “Amazing Grace,” and asked the residents to join her.

“If there’s a song anthem of heaven, it’ll be ‘Amazing Grace,'” she said, “because it’s the grace that’ll get us there.”