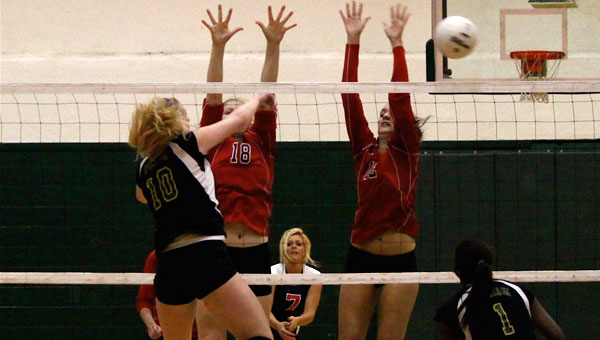 After the Oak Mountain High School volleyball team dominated Pelham in the first two sets of an AHSAA Class 6A, Area 10 match up Sept. 29, it seemed the show was over, but Pelham was just getting started.

“I’m happier with that win than sweeping somebody,” Pelham head coach Haven O’Quinn said. “That is mental toughness, and that’s what we’ve been lacking and what we’ve been working so hard for.”

Pelham scored the first point of the first set, and it was the only time the Eagles trailed during the first two games. After Oak Mountain took the second set on a kill from senior Ashton Slawinski, it seemed the Eagles had it made.

“The first two games we played really well, we played well as a team,” Slawinski said. “We just got that feeling that ‘Oh, we just won the first two, we’ll win the third,’ and we let up, and we shouldn’t have.”

The Panthers took advantage of the Eagles’ complacency as Pelham quickly snagged a comfortable 17-10 lead in the third set.

“After we lost the second game, we were pumped,” said Pelham sophomore Alison El-Feraly, who led the Panthers with 12 kills. “We were confident in ourselves. After that, we picked it up, and were determined to win.”

After the Panthers started out strong on during the fourth set, Oak Mountain scored six unanswered points to give the Eagles a two-point advantage mid-way through after kills from Hannah Kowal, Emily Cosgrove and Abbi Bourque, but the momentum swung Pelham’s way after sophomore Caitland Smith, with help from seniors Alexis Veal and Ashley Kate Kepler, blocked three Oak Mountain attacks to force a fifth set.

While Pelham started strong in the fifth set, Oak Mountain’s Cosgrove blocked four Pelham attacks in a row in an attempt to regain the momentum, but a ruthless kill from Panthers senior Porsha Tolbert snatched it right back as Pelham took the match.

“We weren’t worried at all,” Allen said about being down two sets. “We came back, and we were ready to beat them.”

“They were not playing to not make an error, they were playing aggressively to score,” O’Quinn said. “That’s what we needed, and that’s why we won. Once we finally got a little lead and got a little confidence, I feel like my six outworked them, I really do.”

FROM STAFF REPORTS After rallying from a game one loss to tie the match at 1-1, Montevallo High School volleyball... read more