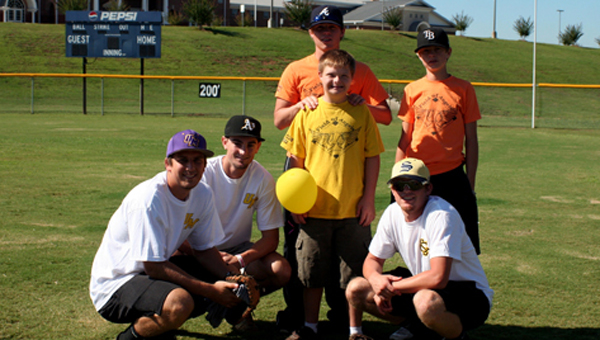 Two University of Montevallo baseball players took time Sept. 24 to spend a day with the Field of Angels organization, a youth baseball league for special-needs children, in Calera.

Field of Angels allows children ages 5-21 with mental or physical disabilities to take part in an organized baseball league.

Shreves and Stiver began the day with a meet and greet, where all of the teams were introduced as well as all of the volunteers. They were then assigned to help out at a field where two teams played a three-inning game.

Their job was to assist the players in any way necessary, but give them as much freedom as possible to play the game their way. After the game Shreves and Stiver signed autographs, took some pictures with kids and had lunch and interacted with the kids and everyone that was involved in setting up the event.

The closing ceremonies marked the end of the second season of Field of Angels baseball. The league began in 2010 with four teams and has grown to six teams in 2011. For more information on the Field of Angels, visit the league’s website at FieldofAngels.com.