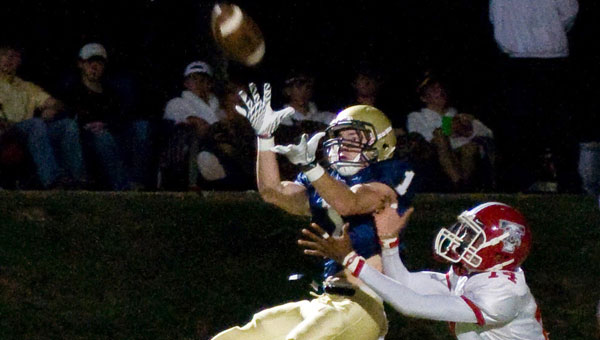 Briarwood Christian School bounced back from its first loss of the season with a 48-0 win over Talladega in an Alabama High School Athletic Association Class 5A, Region 5 contest on homecoming night Sept. 30.

Ben Craft threw three touchdown passes in the game. Will Edwards accounted for two touchdowns, while David Hodges and Collier Smith added a touchdown each.

Craft opened the scoring in the game with his 47-yard touchdown pass to Daniel Robert with 10:03 remaining in the first quarter. Benson Mulvaney’s extra point gave the Lions an early 7-0 lead.

Edwards scored his first touchdown in the game with a 1-yard touchdown run just eight seconds later to put the Lions up 14-0 following Mulvaney’s extra point. Craft threw a 14-yard touchdown pass to Cole Pearson with 7:30 left in the opening quarter give the Lions a 20-0 lead.

Craft threw a 6-yard touchdown pass to Matthew Furuto and Mulvaney added the extra point to push the lead to 27-0 with 2:54 left in the first quarter. Hodges 15-yard touchdown run and an extra point by Mulvaney gave Briarwood Christian a 34-0 lead with 1:25 remaining in the opening quarter.

Hodges led the Lions with 35 rushing yards and a touchdown on six carries.

By SHANE GAUT / For the Reporter WASDEN — Coosa Valley Academy coach Bobby Hughes and his Rebels were hungry... read more