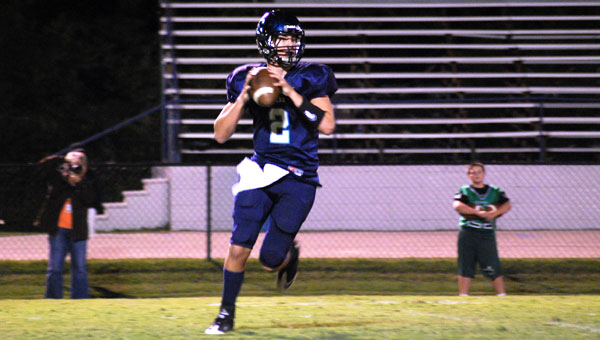 Calera High School quarterback Zach Reneau rolls out for a pass in the Eagles' win over Holtville on Sept. 30. (Reporter Photo/Steven Kilpatrick)

CALERA — After giving up 50 points in a huge loss a week ago to their cross-town rival, the Calera Eagles bounced back with a win over the Holtville Bulldogs 25-13 on Sept. 30.

The Eagles took an early lead after forcing the Bulldogs to punt. Running back Ronnie Clark took the ball 46 yards down the field for a touchdown out of the wildcat formation.

Early in the second quarter, the Calera defense forced another Holtville punt. Quarterback Zach Reneau led his team 40 yards down the field and Sam Adams capped the drive off with a 2-yard touchdown run to take a 13-point lead.

Again, the Calera defense came up big with a three and out to force another punt. This time, Clark started the drive in the wildcat formation, and after breaking a few tackles, he broke free and took the ball 57 yards down the field for a huge touchdown late in the first half to take a 20-0 lead over the Holtville Bulldogs.

The Calera Eagles held the Bulldogs to only 30 total yards in the first half.

Both teams were forced to punt on their opening drives of the second half. When Holtville got the ball, they slowly started moving the ball down the field. With only 28 seconds to go in the quarter, Holtville finally got on the scoreboard with a 1-yard run from David Jackson.

After few penalties, the Eagles answered back with a five yard touchdown from Adams to take a 25-7 lead over Holtville. The Bulldogs would not give up easily in the fourth quarter. The Bulldogs took over on their own 35-yard line and took the ball 65 yards down the field for another touchdown.

After failing to complete the two-point conversion, the Calera Eagles had to hold on to a 12 point lead with a little under five minutes to play. But, Holtville lined up for the onside kick and converted to keep their offense on the field and try to narrow the lead even more.

Five plays later, the Calera defense stepped up yet again. Jeremy Hyde came up with a huge interception to keep the Bulldogs out of the endzone and help the Eagles go on to win the game.

“Looking forward to the second half of the season, this just shows me that we can rally together and get back on track,” said Calera coach Wiley McKeller. “I believe in these kids and I think we will be just fine the rest of the season.”

Calera moves to 2-4 (0-3 in Region play) on the season and heads on the road next week to take on Lincoln next Friday night.