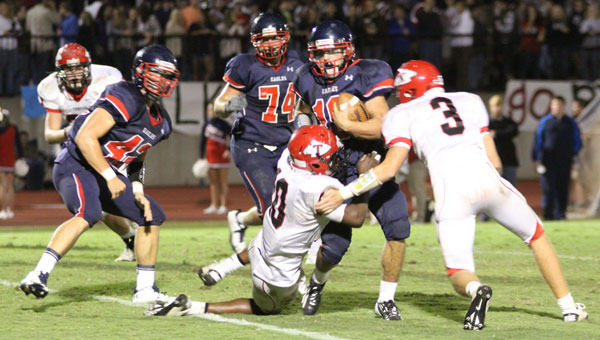 NORTH SHELBY — The Thompson Warriors were looking to build upon last week’s win at Carver while facing the Oak Mountain Eagles on Friday night, and the Eagles were looking to forget the first half of the season and make the second half count.

After it was all said and done, the Eagles and their fans celebrated with a 33-10 victory Sept. 30.

With the ball on the Eagles’ side of the 50-yard line, the offense sputtered early not able to muster a first down and Sapp was called on punt the ball away.

The two teams traded possessions and then the Eagles took over on their own 10-yard line. A 30-yard jaunt by Bradley Bostick, helped to establish the running game. Two plays later, Jake Adams hit Barrett Gossett for 48 yards moving the ball to the Thompson 15-yard line. The Eagles would settle for a field goal three plays later.

“We have found our power and speed for the second half of the season,” said Eagles’ coach Jeff Harris. “Gossett and Bostick give us that 1 – 2 punch we need in the middle and on the perimeter. Tonight we start a new season and we started 1-0.”

Oak Mountain would score again in the opening minutes of the second quarter as Adams hit a streaking Scott Hester for the 70-yard catch and run. A Mitch Mathias extra point made it 10-0.

With the offense having their problems executing, the Warrior defense was trying to keep them in the game. A couple of big sacks and a penalty left Oak Mountain facing a fourth-and-25 at their own 10-yard line.

After the punt and return, Thompson would start with the best field position of the night at the Eagles’ 27. Trey Matherson used three receivers on quick passes in the flat to move the Warriors to the 1-yard line. From there, Dee Tolbert took the direct snap with 10.1 seconds remaining in the first half and barreled his way in for the score. Matt Nall tacked on the extra point and it was 10-7 at the half.

Thompson started the second half with a 38 yard run by Demetrius Alexander moving the ball into Eagle territory. After moving the ball down to the Eagles’ 25, Matherson’s pass was intercepted at the 10-yard line by Jake Kelley.

“Defense played well in the first half, but we didn’t execute,” said Thompson coach Caleb Ross. “We had great practices this week and had a plan, but tonight we just didn’t execute the plan on offense.”

Oak Mountain would drive the length of the field and score on a Adams 3-yard run. He would finish the night with 47 rushing yards. He also added 166 yards passing and a touchdown.

In the fourth quarter, Oak Mountain would add a safety and two more touchdowns. Bostick scored on runs of eight and four yards respectively in the frame.

Thompson would get within in the red zone once in the fourth quarter before getting pushed back and having to settle for a 37-yard field goal by Nall to cap their scoring for the night.