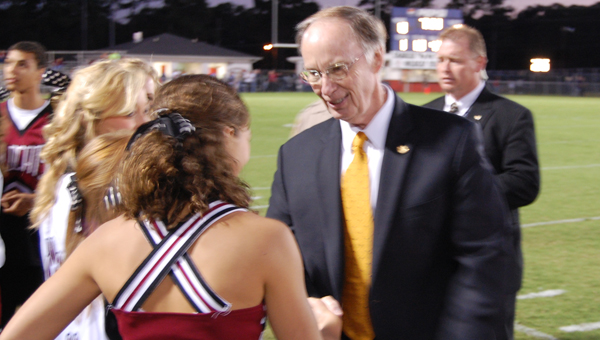 Bentley, a 1961 graduate of the school, was recognized in an on-field presentation just before kickoff of the Wildcats’ game against Moody.

“It’s good to be back in Columbiana,” Bentley told the crowd over the public address system. “When people say ‘where are you from?’ they mean ‘where were you born?’ I always say I’m from Shelby County, and I’m proud to be from Shelby County.”

The class of 1961 is celebrating its 50th reunion. Mike Dorough, a 1961 graduate and chairman of the reunion committee, presented a framed portrait of Bentley to SCHS principal Gene Rogers to display at the school. 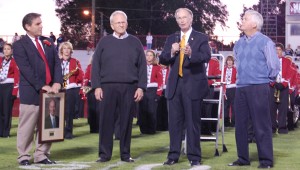 Bentley said it’s been a long time since he’s stood on the football field. When he was student body president his senior year, Bentley said the home team fans sat on the opposite side of the field.

He said it’s great to be back.

“It’s good to see friends, and children and grandchildren of friends,” Bentley said. “Fifty years is a long time, but it seems like yesterday that I was here.”

Bentley was a member of the school’s state champion debate team.

“When I was here, we had absolutely wonderful teachers,” he said. “We had a great education here. That is what propelled me to what I am doing at the present time, and I want y’all to know how much I appreciate it.”

He joked that he hopes “that picture doesn’t clutter up your school too badly.” 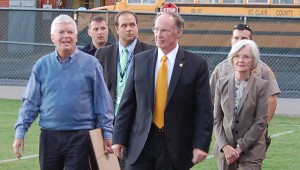 Ellis praised Bentley for “remembering his roots,” adding the governor “was raised and reared about a mile down the road from where we’re standing right now.”

After the presentation, Bentley and his wife, First Lady Diane Bentley, went into the stands to mingle with the governor’s former classmates.

A reception will be held after the game.

Rogers, the school’s principal, said having Bentley back on campus is good for the community and current students.

“Knowing that someone that walked these halls and participated in things at Shelby County High School has had a distinguished professional career and also been elected governor is something that students can look to and hopefully be an inspiration for them,” Rogers said.