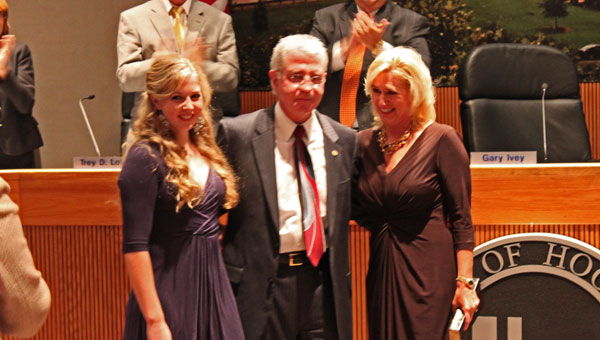 “I appreciate the unanimous support of the council,” Ivey said after he was sworn in during a Sept. 30 meeting at city hall. “I assure you we’ll continue on. We’ve had a good administration for seven years, and nothing is going to change. It’s just going to continue on and get better.”

Ivey has served as Hoover City Council president for the past seven years, and will serve as mayor through the rest of this mayoral term, which will end in 2012.

“We’re going to continue to stay the course and continue to improve quality of life,” Ivey said. “The council supported me, and I am very honored.”

City councilman Brian Skelton said one of the “great things” about Hoover is the lack of “infighting.”

“Gary’s been very involved (on the council). He’s a successful businessman, and he’s familiar with multimillion dollar budgets,” Skelton said.

Ivey’s wife, Carolyn, said her husband’s position as mayor is an “honor.”

“It’s an incredible honor for my husband to be named mayor of the city,” Carolyn Ivey said. “God has done incredible things to bring us to this point. I pray for wisdom for my husband so he can do what’s best for the city.”