Jaguars rocked by Spartans at home 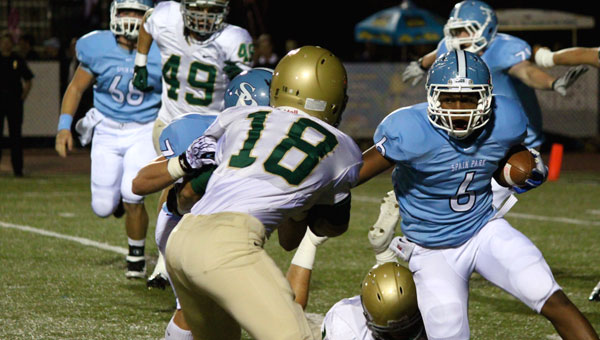 HOOVER — Spain Park head football coach Chip Lindsey made no excuses for the Jaguars’ 35-7 loss to Mountain Brook High School Sept. 30, but instead said he is ready to use it as a stepping stone.

“We got beat by a really good football team,” Lindsey said. “You have to give Mountain Brook a lot of credit because they obviously came in ready to play, and we weren’t. We’re going have to figure out what’s going to make this bunch improve, so we have a lot of work to do. The only thing we can do is get ready to go back on Monday and get it figured out.”

The Spartans (6-0, 4-0) got off to a fast start at Spain Park Stadium and never looked back. Early special teams mistakes were costly for the Jaguars (3-3, 2-2)  as a short punt on Spain Park’s first drive set up an 8-yard Spartan touchdown that was followed by a turnover on a fumbled punt return by Jaguars at their own 13-yard line, setting up a 4-yard touchdown pass to give Mountain Brook a quick 14-0 lead with 4:20 remaining in the first quarter.

The Spartans marched 86 yards downfield a few drives later, extending their lead to 21-0 to close out the first half on a 6-yard touchdown run.

Mountain Brook capped an 80-yard scoring drive with a 17-yard touchdown pass to start the second half, but this time, the Jaguars had an answer.

Junior quarterback Nick Mullens hit senior Alando McDonald for a 40-yard gain, setting up an 18-yard touchdown run from senior Sean Mardis, giving the Jaguars their first – and only – points of the night with 5:43 remaining in the third quarter.

“I just ran right, followed my line and cut back,” Mardis said of the touchdown play. “My line does a good job every week for me.”

With momentum on its side, the Spain Park defense stopped the Spartans’ next drive as senior Dustin Cowart and junior Jacob Chaffin sacked the Spartans quarterback to force a fourth down. When the offense was unable to capitalize, the Jaguar defense forced a three-and-out on Mountain Brook’s next drive.

Mullens completed two passes to junior Cade Hoffman for a combined 34 yards and one to senior Reid Reinagel for 12 yards, bringing the Panthers to the Mountain Brook 33-yard line in a must-score situation, but Spartans sack on fourth down ended the Jaguars hopes of a comeback.

“Execution-wise, we didn’t play up to our potential,” junior linebacker Jeniah Jackson said. “We never come into a game feeling like we’re going to give up any points, honestly. It’s a team loss, it’s not on (defense), it’s not on offense, it’s not on special teams, it’s all of us.”

Mountain Brook sealed the deal with a 3-yard touchdown run with 3:29 remaining.

“We felt like we should have been more productive all year,” Lindsey said of the Jaguars’ offense, “but we continue to self-inflict. We continue to repeat our mistakes, self-inflicted wounds, and it’s really frustrating to be honest with you. Hopefully we’ll find some guys that are ready to step up and make some big plays next week.”