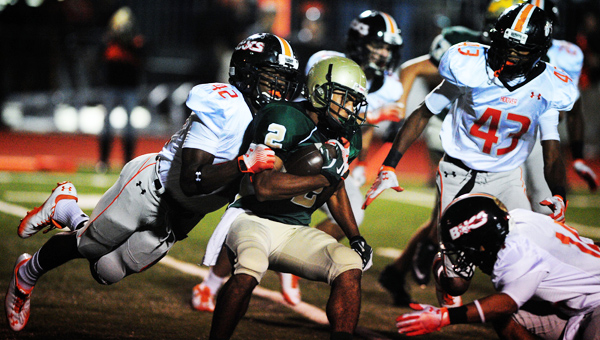 Pelham's Kenny Meadows gets swarmed by a group of Hoover tacklers during the game Friday, Sept. 30, at PHS. (Reporter Photo/Jon Goering)

Fumbles and interceptions plagued the Panthers in the loss, as Pelham turned the ball over 10 times on the night.

“I’ve only got one quote. If you get 10 turnovers, you aren’t going to beat a soul,” Pelham head coach Brett Burnett said after the game.

After forcing the Panthers to go three-and-out on their first drive of the game, Hoover scored a little more than three minutes into the game on a 10-yard run by Caleb Sims.

Two Pelham turnovers helped the Bucs build a 21-0 lead at the end of the first quarter.

Two more PHS turnovers in the second quarter led to Hoover touchdowns, and helped the Buccaneers extend their lead to 49-0 at halftime.

After Pelham recovered a Hoover fumble in the third quarter and returned it to the Buccaneers’ 26-yard line, Pelham fumbled the ball a few plays later, giving Hoover possession on its own 3-yard line and setting up Garner’s fumble recovery in the end zone.

After Pelham’s ensuing onside kick attempt went out of bounds at the Hoover 40-yard line, the Bucs were forced to punt the ball away.

On Pelham’s next possession, a botched snap to punter Justin Nolen in the end zone led to a Hoover touchdown.

After converting a fourth-and-4 play, the Bucs added their final touchdown late in the fourth quarter.

Jaguars rocked by Spartans at home