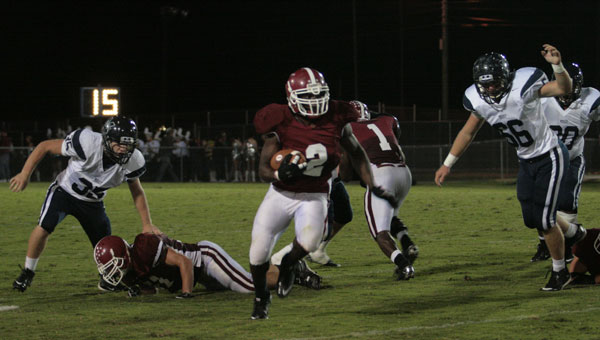 COLUMBIANA — The pregame activities of  honoring Governor Robert Bentley and the introduction of Mallory Seale and Andrew Miller as homecoming king and queen Sept. 30 were a pleasant appetizer for a special night ahead for the Shelby County Wildcats, as they claimed a 44-14 win over the visiting Moody Blue Devils.

Last week, the Wildcats let one slip away and it hurt.

However, Friday night, the Wildcats got just what they needed to put a gust of wind back in their sails – a good win.  It was a homecoming win to be celebrated amongst the faithful of the cardinal and white.  What a difference a week makes.

“Great win tonight and it feels great to be able to enjoy this win with our staff and our kids,” said Shelby County coach Ryan Herring.  “Last week was tough, but we never quit working hard.  The coaches, are kids, everybody kept working together and I am blessed to be a part of such a group.  We needed this one and it feels great.  I am very happy for our guys, they responded well tonight.”

Coming out of the tunnel Friday night, the Wildcats had a different demeanor, a swagger of sorts and it started with their first possession.

After a fourth-down conversion by Ty Proctor connecting with his big tight end, Mike Pate, the Cats were well on their way set up at the Blue Devil 23-yard line.

Montarious McGregor would tip-toe in for the score three plays later from the 2-yard line.  With Denzel Williams converting the 2-point conversion, the Cats held the 8-0 lead midway through the first.

Three plays into the Blue Devils’ first drive drive saw Williams pouncing on the loose ball to give the home team possession at the Blue Devils 38-yard line.  Proctor quickly found Evan McNeal for a 12-yard scoring strike to extend the lead to 14-0.

Just outside the three minute mark of the first quarter, the Blue Devils offense was sputtering while the Cats offense was gelling.  A 13-play, 80-yard drive was kept alive by a Proctor hard count on fourth-and-1 from the Blue Devil 10-yard line.  Fullback, Brent Wooley, dashed in from the 5-yard line two plays later for the score.  A successful 2-point conversion from Proctor to McNeal padded the Wildcat lead 22-0.

The Wildcats had had sent three scoring shots over the Blue Devil bow and facing fourth-and-20 from the Wildcats 23-yard line, it looked like the Cats would get another opportunity.  However, the Blue Devils converted on a 23-yard scoring toss in the back of the end zone to lessen the lead to 22-6.

Within five minutes remaining in the first half, Proctor found a wide open Williams on a fly route for a 38-yard scoring strike and McGregor dives into the pile-on to cap a scoring run from the 6-yard line.  With two successful 2-point conversions on as many attempts, the Wildcats claimed a demanding 36-6 lead heading into the half.

The Blue Devils raised a eyebrow by coming out of the gate with a 10-play scoring drive to lessen the lead to 36-14.  However, the clicking offense of the Wildcats answered when Proctor found Williams on a wheel route, wide open, for a 50-yard scoring toss.  After Proctor connected with McNeal again, the tally was 44-14.

With time ticking away in the fourth and the game in hand, the Wildcat senior players and starters had a well-deserved curtain call with a line change of the junior varsity.

“Our kids played hard tonight.  They worked to get better all week and tonight it showed,” Herring said of his team.  “They earned it and need to enjoy it.”

It was a trail mix of offense for the Wildcats versus the Blue Devils, rolling up 493 total yards with the balanced approach of the run and pass. Most notably, it was Proctor connecting on 12-of-17 passes for 272 yards and two touchdowns – a season and career high.  Wooley finished the night with 100 yards on the ground, McGregor finished with 62 yards.  McNeal reeled in 144 yards receiving, Williams 113 – both had two touchdowns.  The Cats punted one time all night.

“We came to play tonight,” McNeal said. “It feels good.”

Defensively, the Wildcats surrendered 237 total yards to the Blue Devils. Next Friday, the Wildcats travel across the river to take on the Sylacauga Aggies.